Falling out of Fall-In

Wow, is it that time already?

I just want to inform folks I will not be at Fall-In chatting with all the good folks. I work weekends now so attending shows is out for a while.  There has been little of interest to report, other than a few odds and ends;

1. Widget manufacturing has continued, but I am souring on this prospect very rapidly. It prevents me from releasing anything new and can be a HUGE waste of time if the deal falls through....... Right now about half the deals fall through and the other half pay off nicely.  I got to sort this one out.

2. Having said that, there are some new things in the works. The 28mm building if I ever get around to it, and some other odds and ends. Widgets are wrapping up so hoping to knock out some more parts to it. I finally had an inspiration for a 28mm tanks kit design. I was drawing a blank on this and even posted on Craigslist to no avail. Finally I thought about my days in the Air Cav and the classic image of a Huey helicopter with door gunners hanging out and blasting away. So it occured to me that in the future what used to be the cav, then became the air cav, would evolve into the Space Cav.  And they would need a utility vehicle to transport them.  I will post some pics when I get some design done in CAD.

3. I am more determined than ever to move into 28mm scale. I have been informed by some smart people that 28mm is about 90% of the hobby.  There are a lot of other things I found out that push me to think it is true.  Scale creep is a very real issue with the hobby, as evidenced by this model kit; 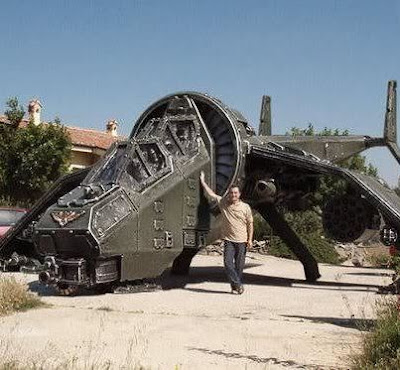 Seriously, where does this end?

4. A freak storm blew up and knocked out my electricity for a while.  I have grown fond of electric in spite of my usual dislike of modernization.  Maybe some things are better than the old days. It was nice to have power again and I was lucky compared to many.  I signed up for rescue work at church and eagerly awaited a call. I was expecting some serious, "Timmy fell down the well" heroics but got nothing of the sort.  It would have been too much to hope for something like, " Genestealers are using the storm to cover an invasion. Grab all your guns and ammo and hold the corner of 3rd and Main at all costs."   The reality was they sent out e-mail requests and my power was out so I did not even get to suck water out of people's basements. If I had one of those smart phones I would have gotten the requests. Instead I look like some slacker who refused the urgent call for sandwiches down at the fire station. I might have to explain myself this Sunday........

5.  I am voting in the morning because I will be out of town on election day. Seems like folks are really taking this whole election thing to heart. 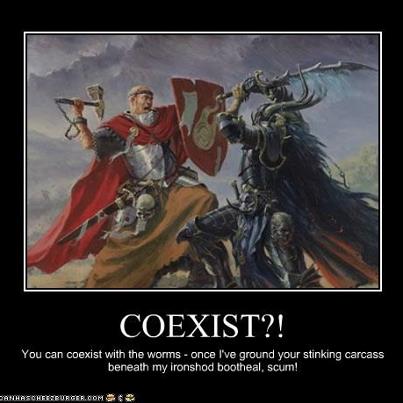 No matter who wins life will go on pretty much the same, so maybe we should lighten up and roll some dice or paint some minis.

6. I found this guy hangin on the side of the shop. A marbled orbweaver, which sounds like a Magic the Gathering card instead of a spider. Nice camo, for a pile of leaves. Not so good for the side of a building. You can see him from all the way across the yard. 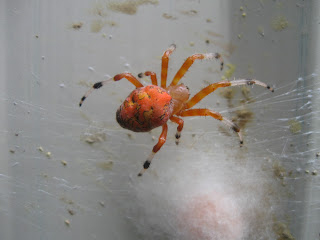 7: I have about 3 weeks to get the new store site up and running. It is half the price of the old stire and allows unlimited products. There may be some down time but I am trying to keep that to a minimum.

8: And finally another pic of a regiment from my dusty pile of minis. I picked these up at a con years ago to use as Norse mercenaries. They are Brittania minis and chunky like GW figs are. The sculpts are nice but my painting was table top quality. I like the extras they included of guys carrying off prisoners. 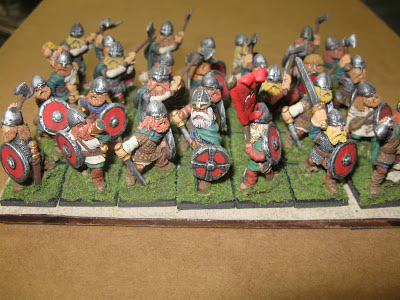 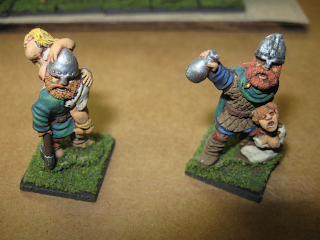 Have a nice time at the con. It seems to be plagued by bad weather the past few years, but it is always fun to go to.
﻿
Posted by Ken Krout at 7:48 PM