Just a quick update on some crazy schemes and progress.

1.  I have made a mountain of widgets and have a couple more to make. Going to make a cup holder and another bit for someone. This has sadly prevented me from making a lot of progress on hobby products..

2. It has however allowed me to exist. I hired a scribe to fend off the IRS and am actually legit for a few months.  Nice. I may even become a thousandaire some time in the near future.

3. The video has gotten a boost from somewhere, currently over 50,000 views. This is where all the widget contracts come from.......

4.  I have become re-interested in Warhammer Fantasy Battle. The rules are good but the army books are ruinous to my enjoyment of the game. I am therefore writing a new army builder file. I have no idea why army builder files fascinate me so. They are like a 20 sided Rubik's cube. This file will be based on some sanity and allow old timers to play without exploding.

5.  Summer is here, and that means renewing the fight against Mother Nature. This year looks to be a grim affair indeed. There has already been use of chemical weapons against me, a direct violation of the Geneva Convention. I am suffering form poison ivy. There must have been some in the weeds that were strangling my cherry trees.  The left eye is most likely going to go closed for a while.

6. Still no luck finding a helper. My kids are all fired.  Slackers.  It seems giving them money for nothing has created a dis-incentive to work. This is going to be an issue someday.  At some point I will need some help or I will have to limit output even more than it is limited now.

7. I have started the sci-fi girls at least. Here is a pic of one of the cavities; 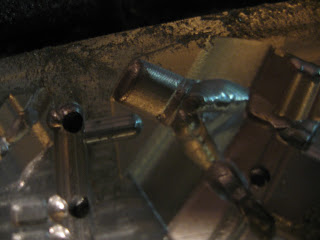 Still have the whole other side to do and have to sharpen the edges and polish. This might be a waste, because I had to reset the zero. I made an error and the spindle went off zero. It is impossible to get it back perfectly. I had not done any final cutting so I decided to continue. It should be VERY close, but things were too far along to call it quits. BTW- the sniper rifle is pretty darn big. There is no way these girls are going to be called puny.

Going to keep working on this as long as no more widget deals come in.  It really has taken way too long to learn and make things like this, but just part time and one person keeps production down.  I have plans for the next sprue after this, which I want to be fantasy.  As you can see it all depends what I am playing as to what gets made. Strange how we gamers have attentions that leap from place to place.


Have a great weekend and watch out for toxic plants.