Something of note to report. I have partnered with Gangfight Games to offer some terrain for his Mechadrome game on kick starter. link to kick starter  He is going to offer currently available terrain and I am also remaking the modular building at a 70% size reduction.  This is my first tentative foray in to the realm of kick starter so we will see how it goes. You know my take on kick starter, but I got to evolve somehow.

Other than that it is mostly just trying not to freeze to death in this era of global warming.  It really is just too easy to pick on those folks, and I should show a little more class. Except I have no class. In reality I am Duck Dynasty without the money. I am not trying to be controversial, but it seems surreal that folks demand total control over every aspect of the lives of every living and breathing  creature on earth in order to combat a problem that only exists on a computer model. Kind of makes Orwell turn out to be an optimist.

But spring has to arrive sooner or later and I will get some work done.

In the meantime I managed to dust off some old minis and play a game of Chipco Fantasy Rules!.  Second edition of course.  I really suck at change.  If it ain't broke, why fix it?

This battle featured a horde of barbarians squaring off against some civilized folks.  Elliot was again my all to friendly opponent. 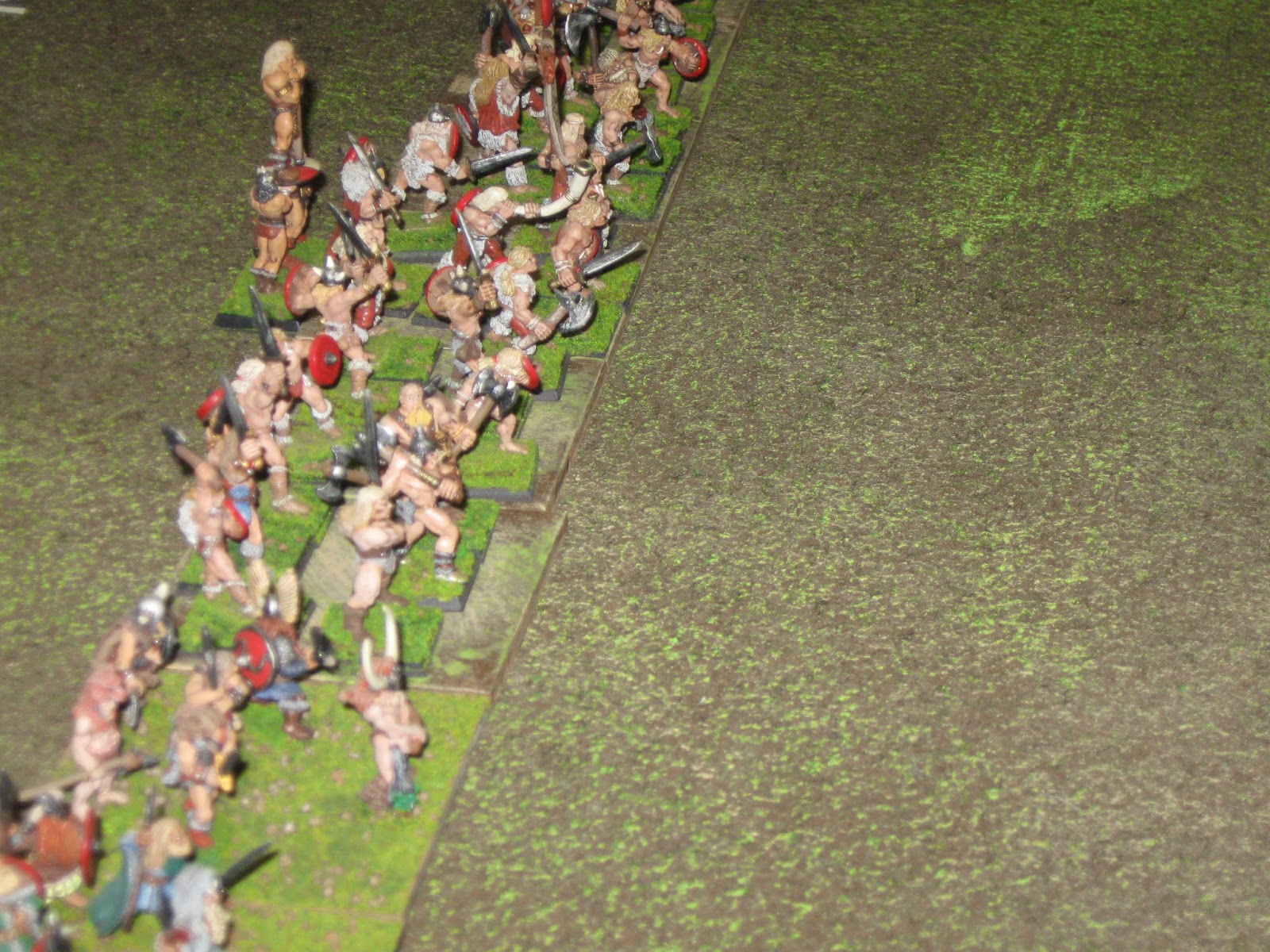 Here is the main barbarian battle line. A lot of the old Copplestone figs from Grenadier, along with a smattering of other odds and ends. 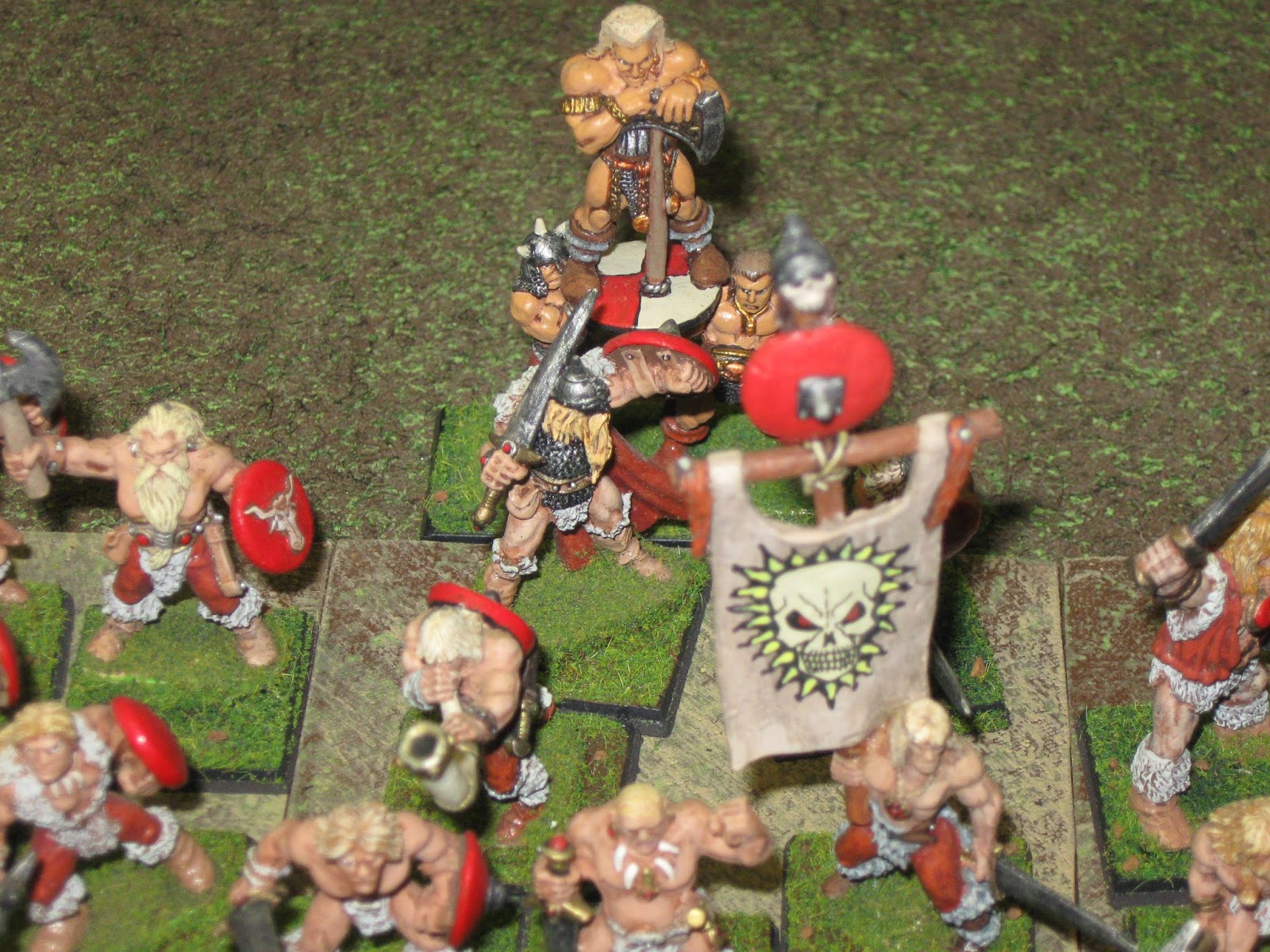 ﻿
Here is my general. Standing tall on his shield bearers. This a great fig from Harlequin. 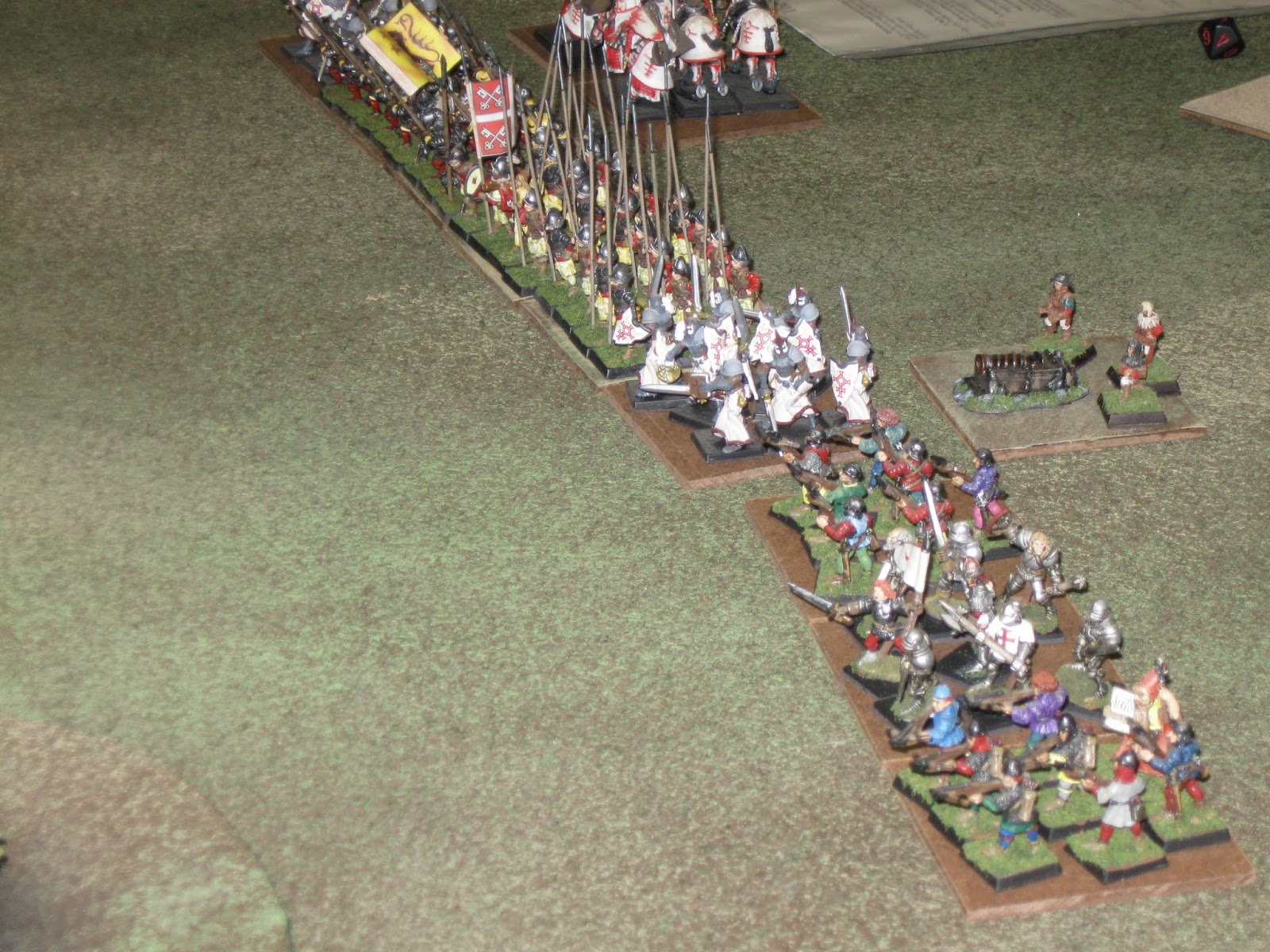 This is the civilized folks. A real diversity of manufacturers. Some Essex and Old Glory pike units, some old Citadel crossbows, a unit from the Confrontation pre-paints, and a canon from unknown.  This is the thing I love best about FR!.  You get to use anything.﻿ 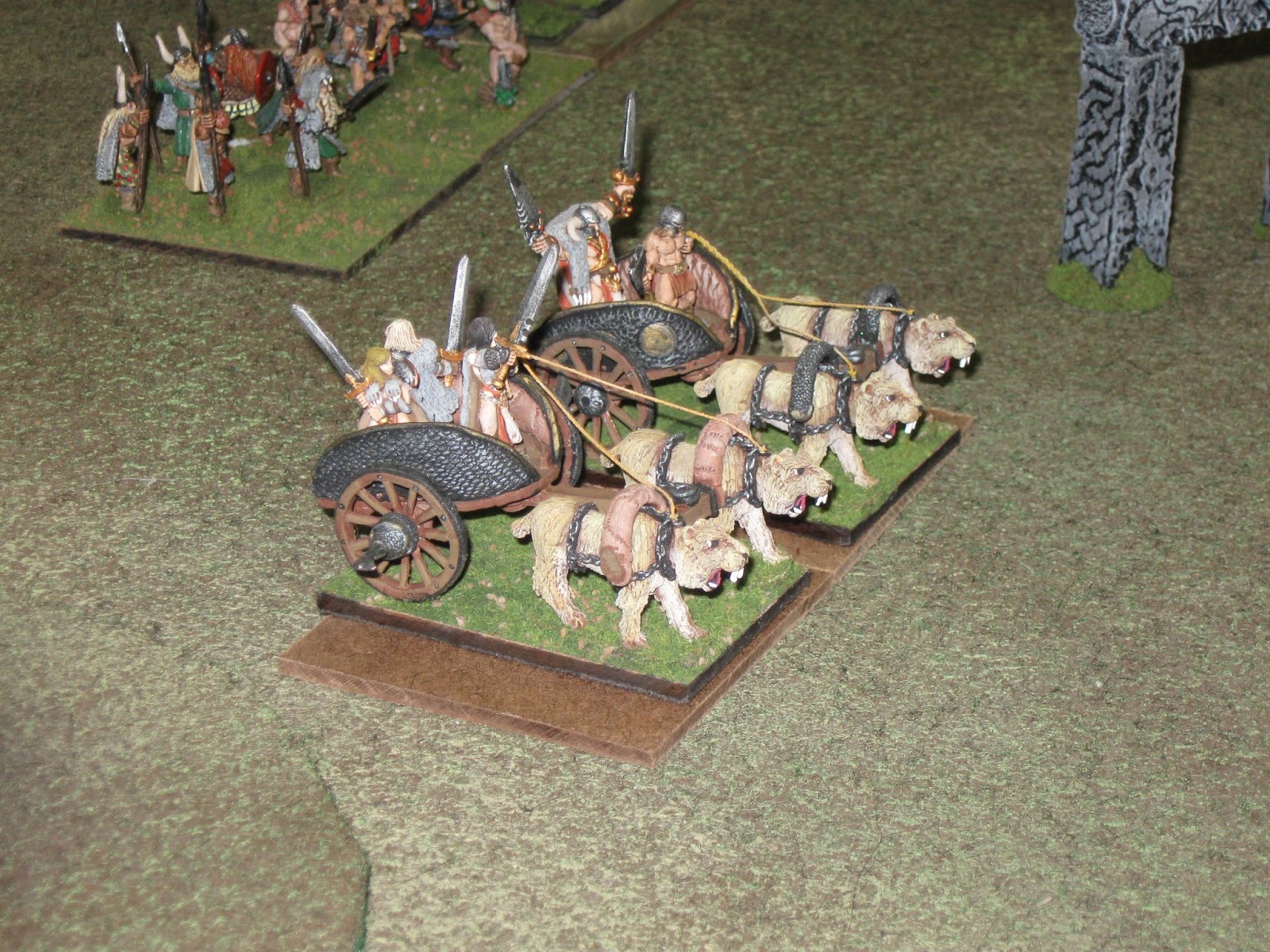 The game begins. We rolled no omens, and Elliot out scouted me by virtue of his light cav. He chose to set up second and move second.  By virtue of his being able to see my deployment he cleverly had his main line overlap mine to my right. Both our lines were stronger on the left, although I was counting on a stand of trees to protect my right side from his knights. I moved my heavy chariots forward to try and break up the enemy line before the main battle begins. In FR! infantry units in formation support each other and give and receive bonuses. Cavalry, monsters, and other troops do not get this bonus. It is important to break up an enemy battle line as much as you can before you lock up. This gives a decisive advantage later. The preferred method is missile fire, but barbarians are a little more direct. I sent in the Standard miniatures chariots with the Chronopia  figures riding in the back. 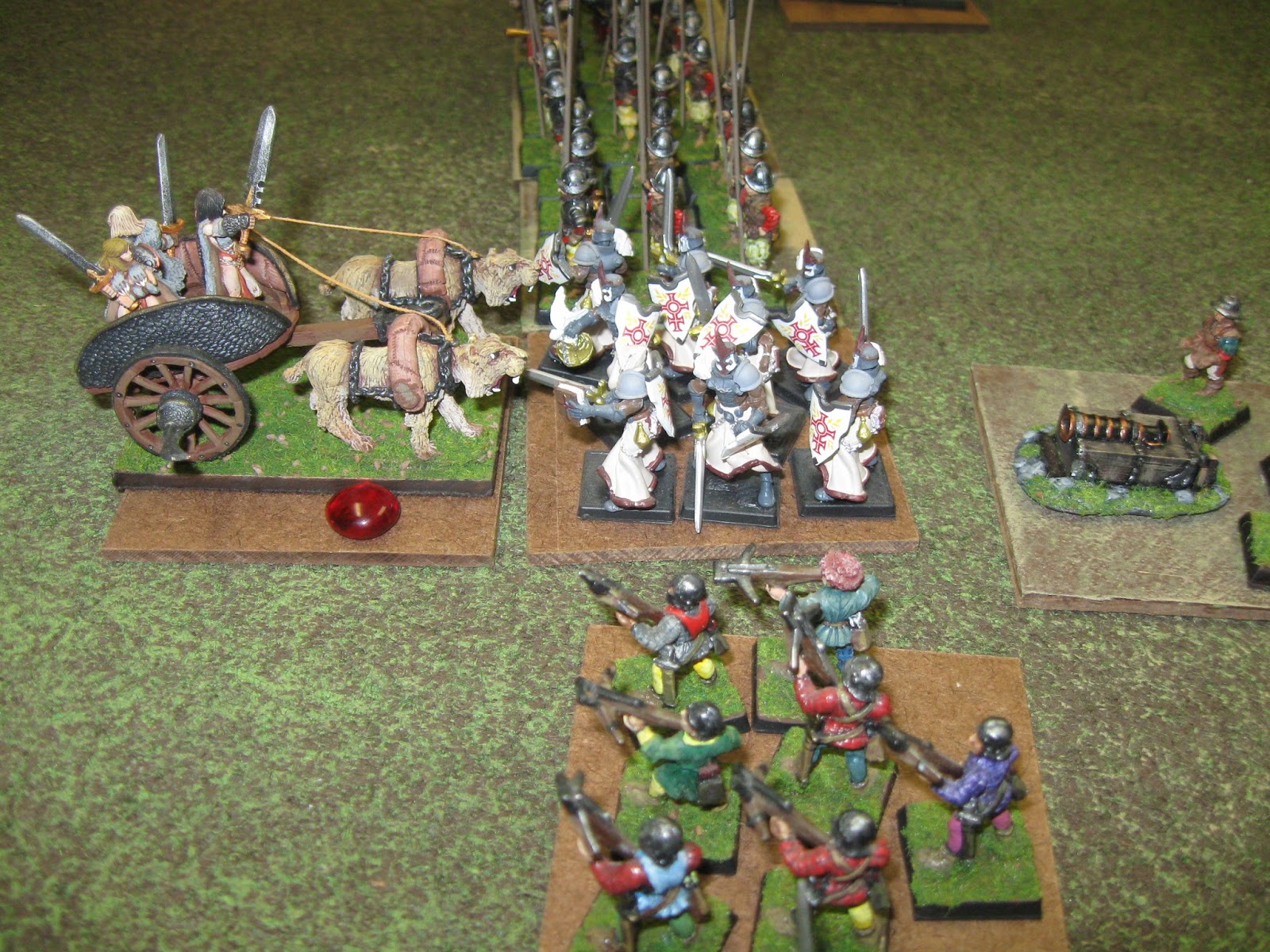 FR! also has a paper-rock-scissors aspect to it. Pike men get a bonus to attack units from the cavalry category, while hand weapons get a bonus to fight against pikes. The chariots were aimed at the enemy foot knights instead of the pike men. This did not go well, and after some bad impact rolls these units died pretty quickly. I hit both ends of the line and neither had any effect on the enemy. I was still looking at this intact battle line.
﻿ 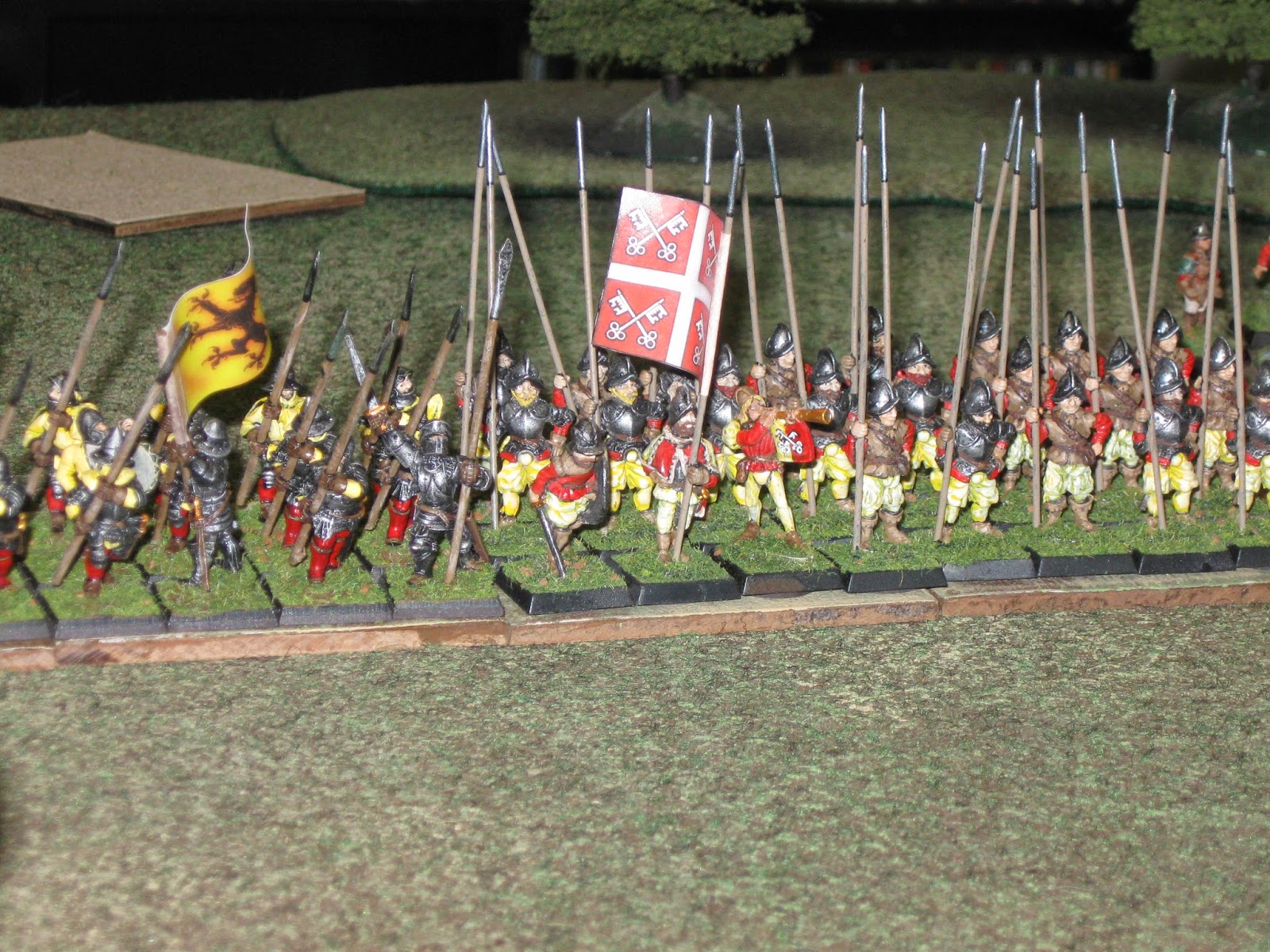 Here Elliot moves his reserve knights with his general to his right. I sent in my heaviest units to break this area and turn the whole flank of his line. This move was very timely and worked out well in the end for Elliot.
﻿ 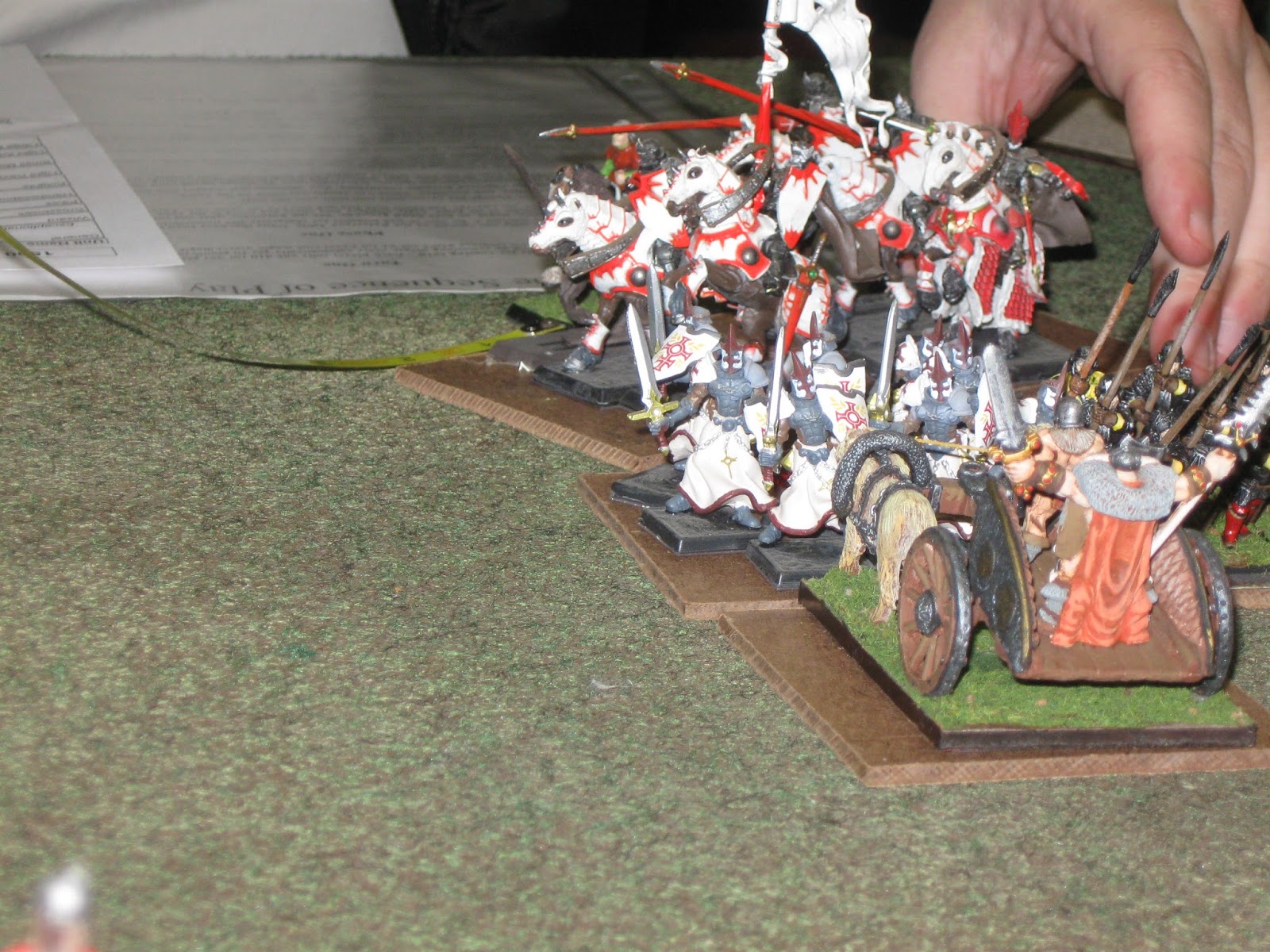 The woods on my extreme left was the start line for my elite fanatics. These troops fight as equal to whatever they face, and in the case of elites they get +1. FR! uses an opposed D10 system for combat. These 3 stands ran in to some problems with some light cavalry and 2 of them died pretty quickly. The last one really opened up a can and avenged his fallen brothers...........﻿
﻿ 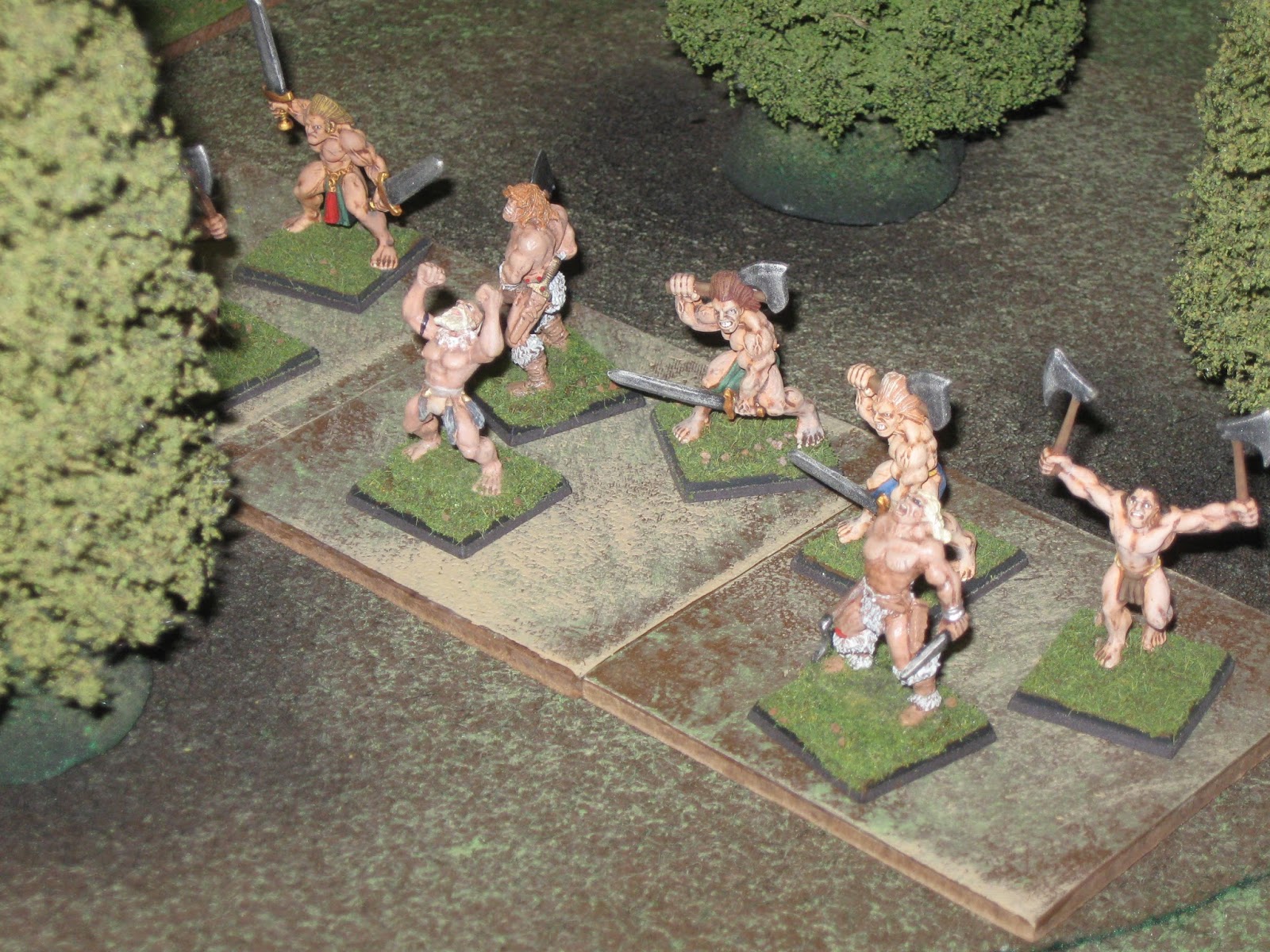 This is the real punching power of the army. These are battlewagons, and oversized ones at that. FR! has a base equal a unit. But you can make a unit cover 2,4 or even 6 bases to make it more powerful and allow you to use larger models. These are double sized battlewagons and they surged forward. ﻿ 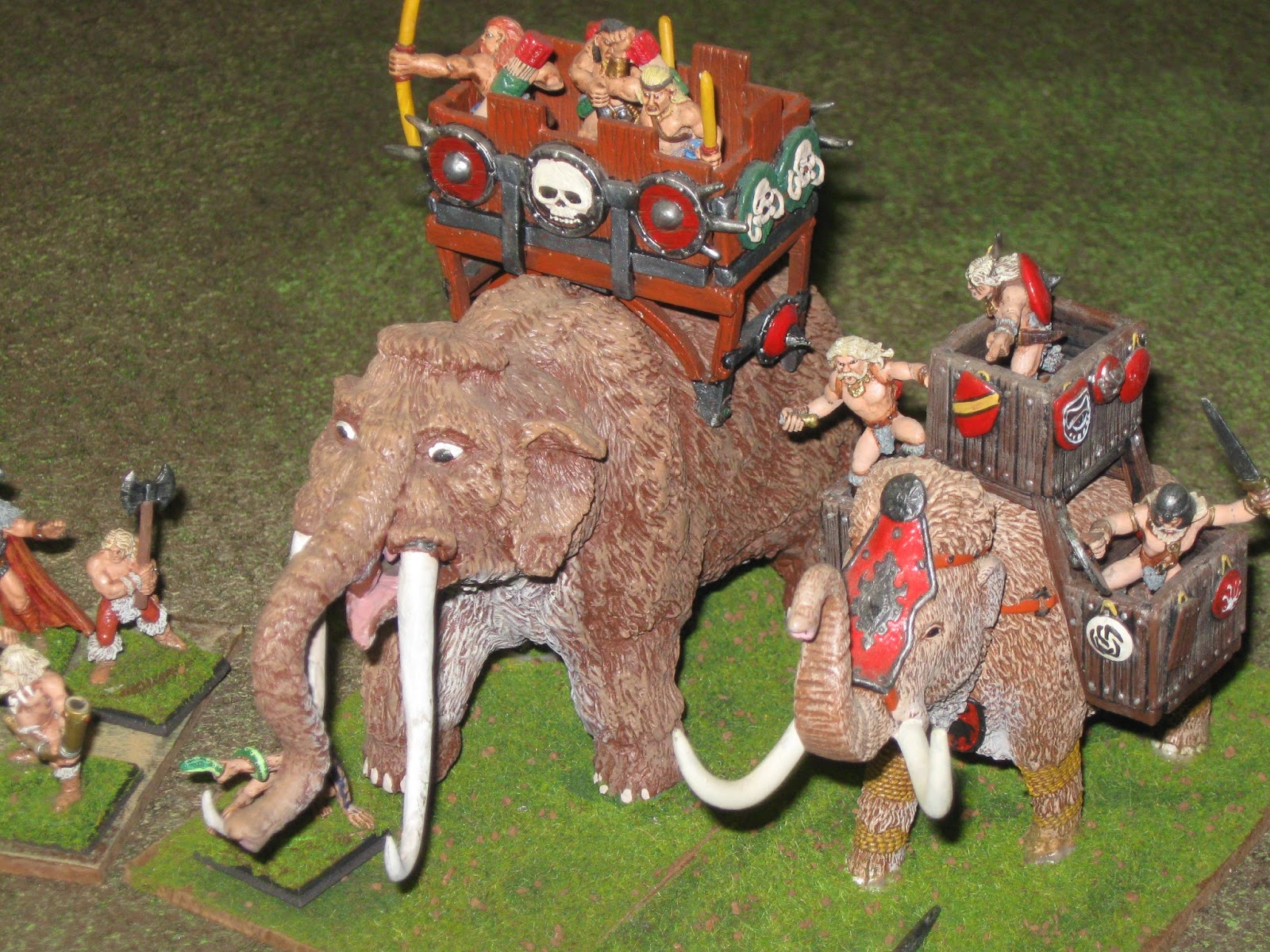 This pic shows the stage in the battle when all the preliminaries were over. At the top the mammoths were going full steam ahead. A unit of Empire ogres fights valiantly to hold them off, while the top most one stomps a canon crew in to a jelly. 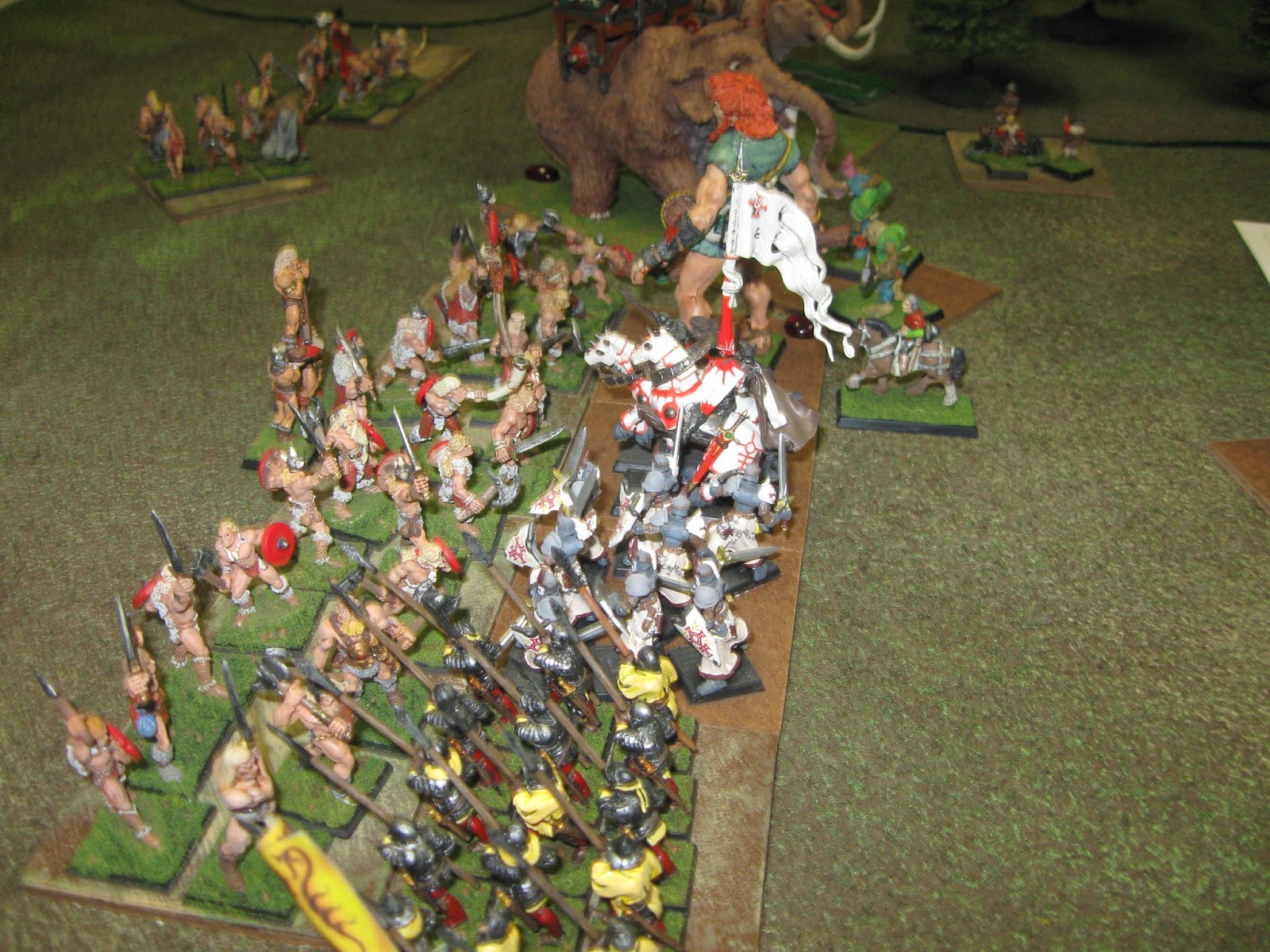 These are the units that held the line for Elliot. I had much better luck in the magic department and these guys were struck by spells again and again, but managed to hold me up long enough. They prevented my mammoths from getting around the flank. ﻿ 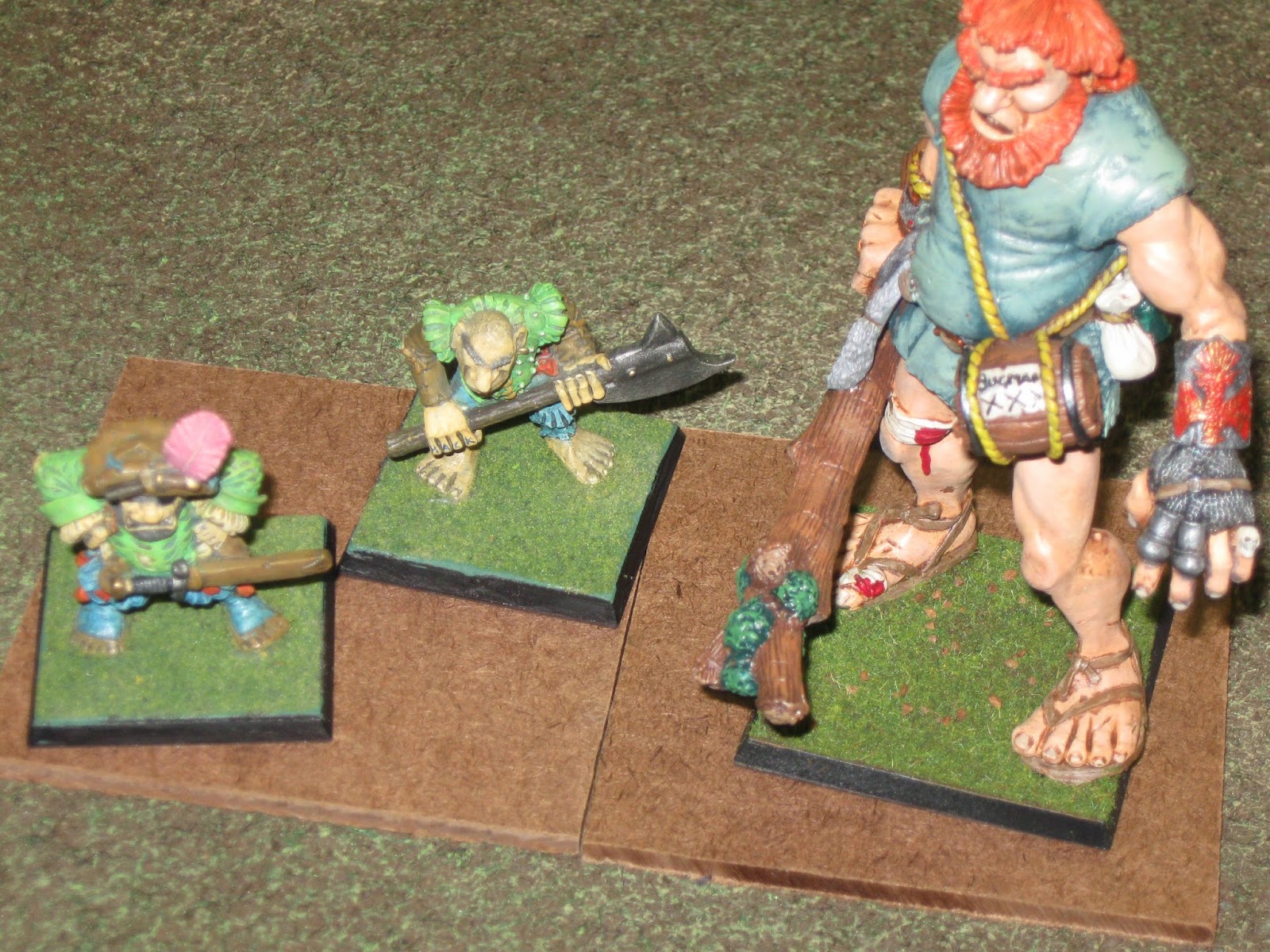 Here my mammoths are surging forward. My earth shaman opens up a chasm in the ground to protect the flank of the mammoth from some more of the Empire ogres. This trick helped save my troops and was again the result of my much better luck with magic. These ogres were eventually wiped out by that last fanatic who went on a rampage. 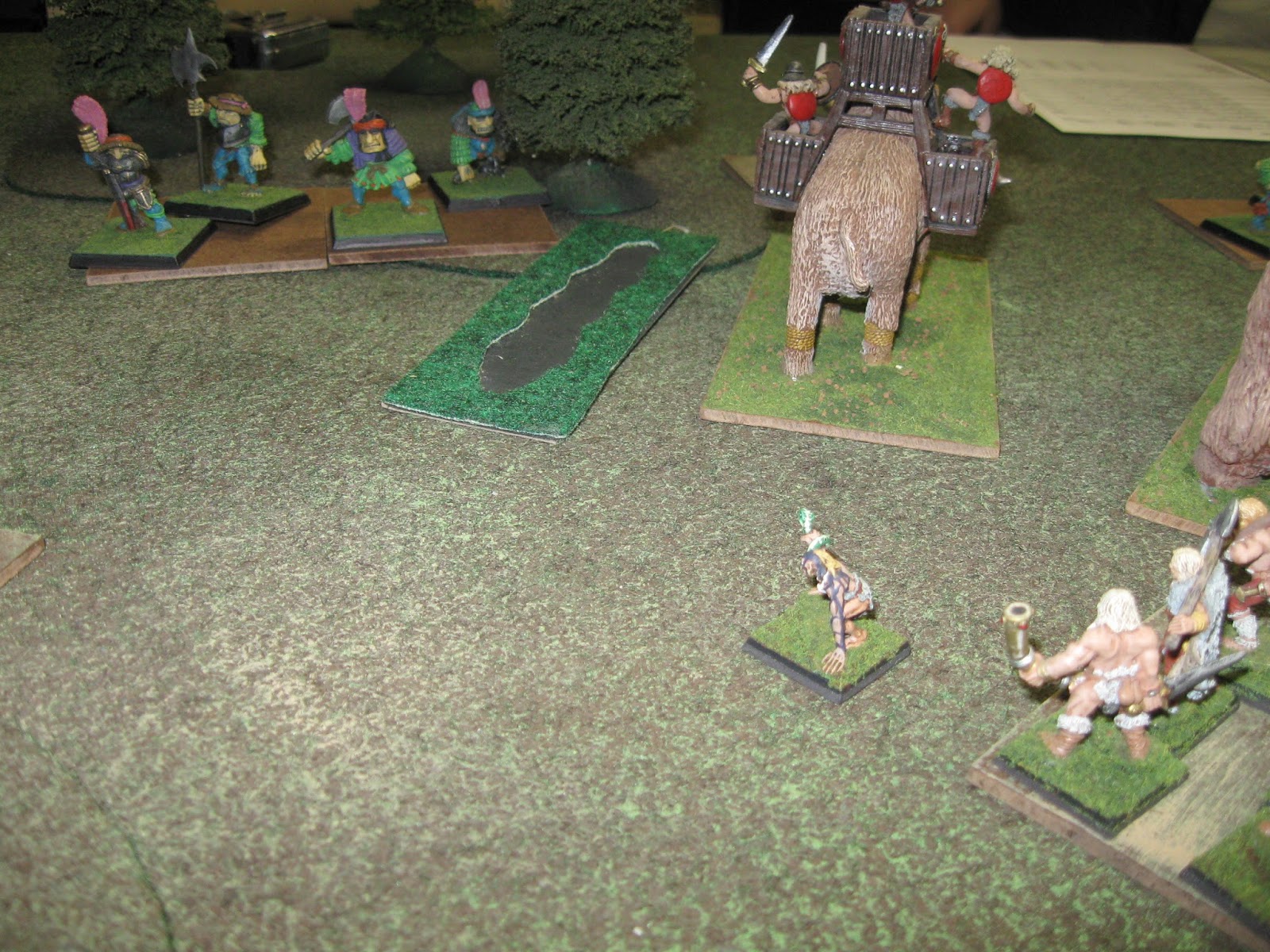 This is where the battle was decided. While my mammoths were out being kept busy, Elliot's general and his retinue cut a path in to my battle line. He challenged my general to single combat and managed to capture him and held him as a prisoner. Then both ends folded in and my troops were forced to fight in opposite directions. This caused them to lose support for each other, which created more problems. In this photo you can see my general and shield bearers being carried along with Ellliot's knights. (We broke a model and substituted an unpainted centaur as a stand in.) My general managed to make his escape roll and rejoin my crumbling infantry line, only to be killed fighting the next turn. 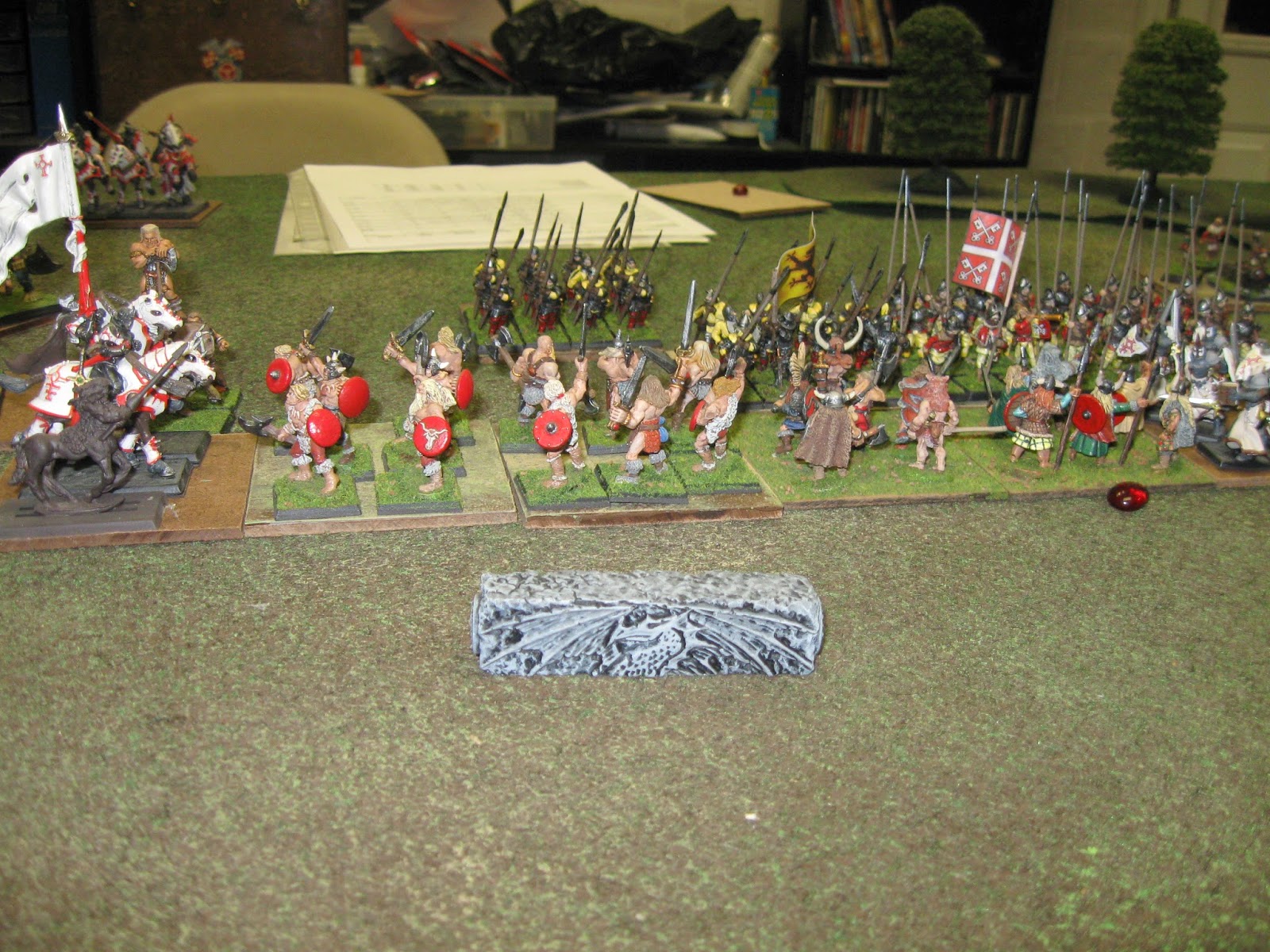 This marks the end of the fight. My troops are demoralized and scattered, while the enemy is reforming for an assault on the mammoths. Battlewagons are vulnerable to infantry assaults. Infantry can board them and kill the crew, commandeering the battlewagon for their own use. Faced with a lot of good quality enemy infantry and little support, my mammoths would have been captured and the crew killed for sure. Elliot managed to win despite having a totally hapless wizard. I think he cast one spell and failed to dispel a slew of my shaman's. ﻿ 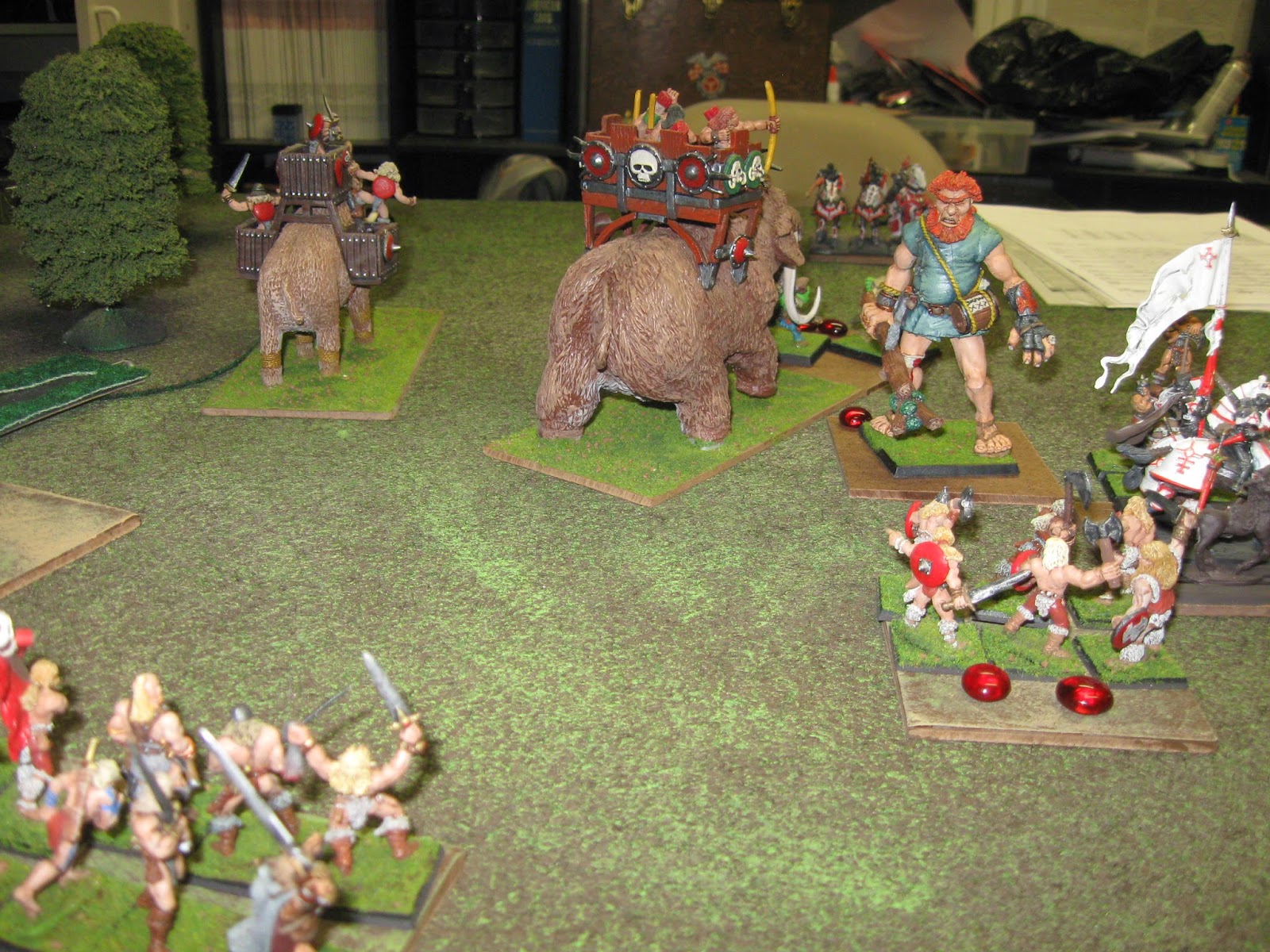 In this game there were mostly odd minis from old companies. I have to say it was a good game that swung back and forth and was decided by some clever moves on Elliot's part and by my heavy hitters being held up just long enough.  ﻿
And here is the victorious general. I have no idea who made this mini, but I always like the style. Very no-nonsense and what I imagine a real warrior would look like in the field. ﻿ 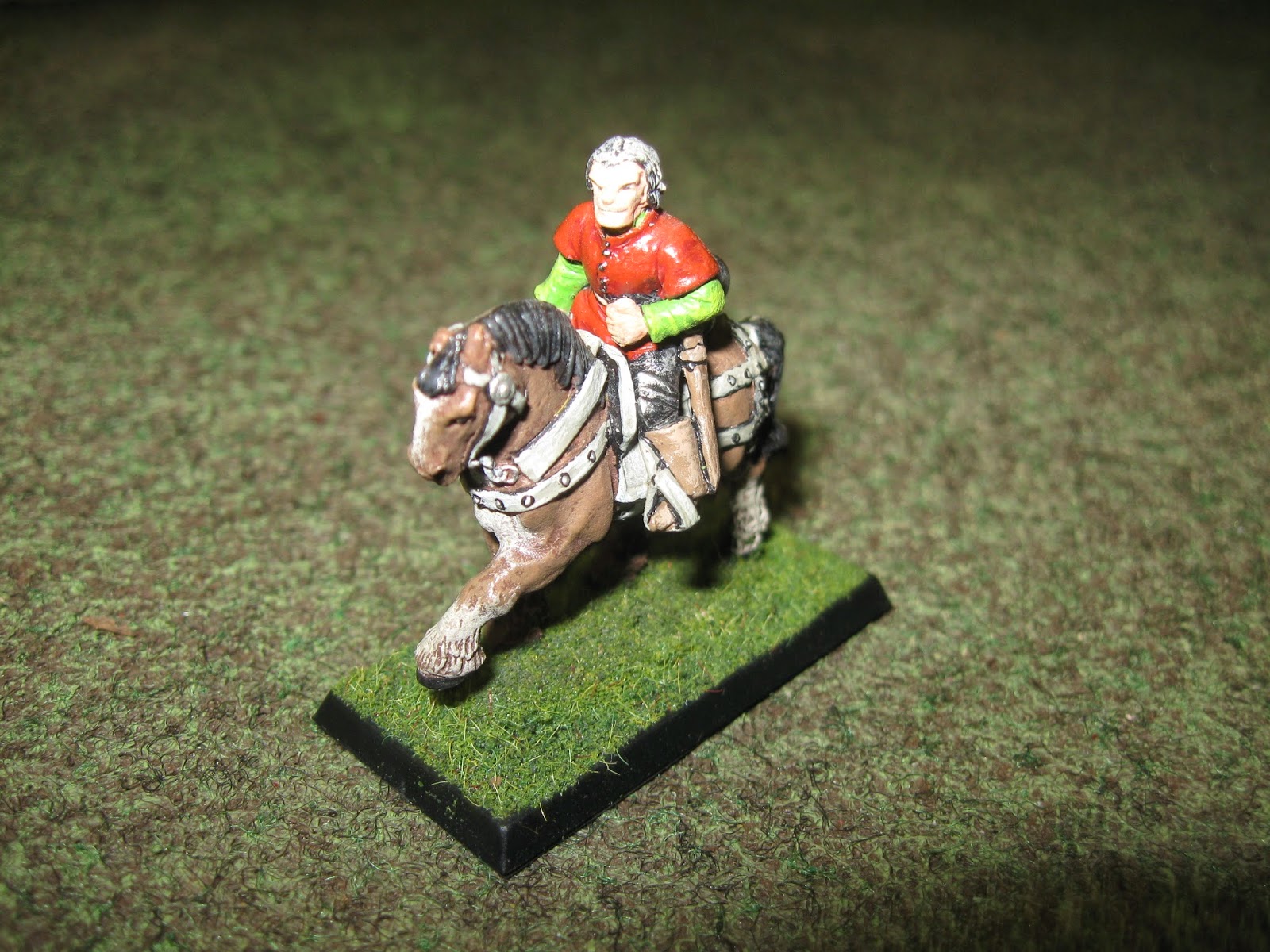 There is a trend for a lot of minis to have what I call the "Liberace" effect. 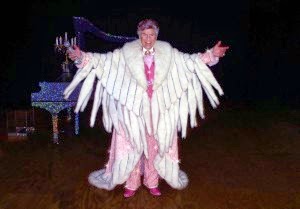 This is Liberace in case you never heard of him. He always overdressed a bit. Below are pics of 2 women. If these were both minis one would be a lot better to paint for sure. But in real life one looks a lot tougher than the other in my opinion. 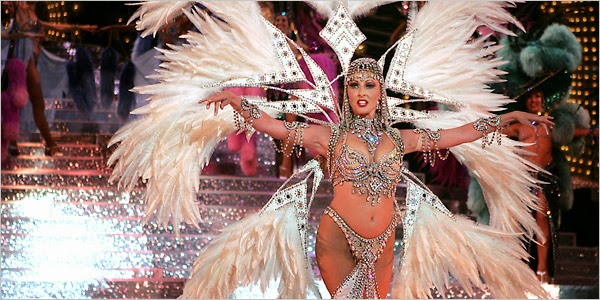 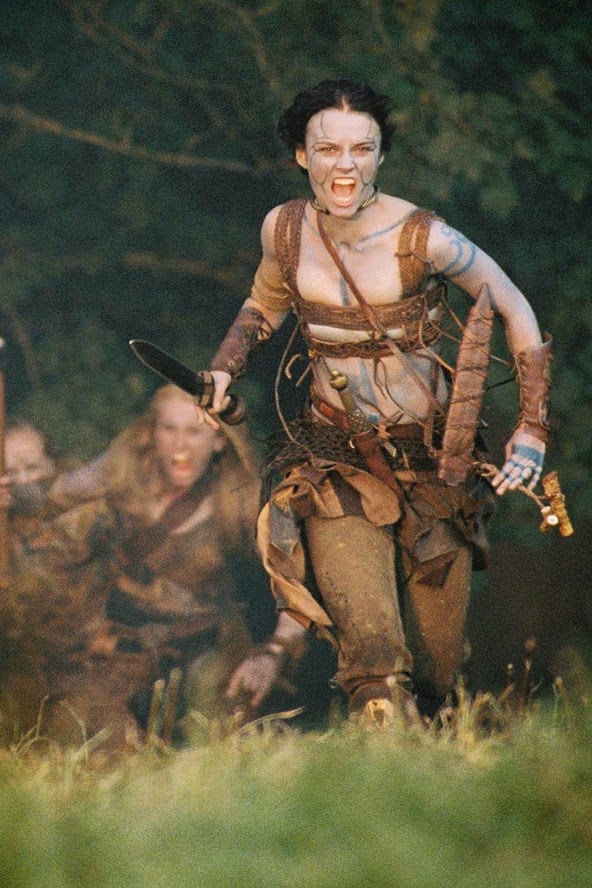 Anyhow, it was a lot of fun to roll dice and move figures. And in 4 days I will be hosting a slot car race night. If I get a moment I will take a few pics and post a report of that. Some of us are going to make ork battlewagons to race at some point. :)

It is really nice to have a pile of hobbies to keep me occupied.   I rate FR! second edition every bit the equal of the very earliest Magic the Gathering and Squad Leader as the best games I have ever been fortunate enough to play. It is abstract in many areas but it plays very well. I only have a slight dislike for the missile fire system, and think undead are a little too tough. Other than that it is simply a delight.

If anything of note happens I will report it. And expect a smaller scale modular building to come along soon and be available in the store and on the kick starter .  If it ever stops freezing.
Posted by Ken Krout at 8:55 PM No comments: