Smoking Again, and no this is not Colorado

Sometimes only a cigar will do.   I suggest these; 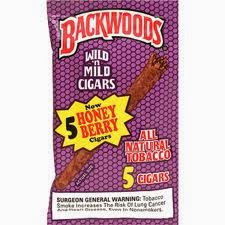 They are less a cigar and more an air freshener you can light up.  If it was a cologne it would put that crap from Calvin and Hobbs out of business.  (Calvin somebody, you know who I mean) 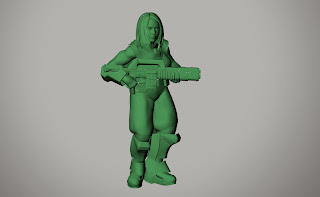 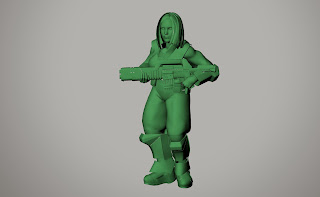 But it is done.

After some talks with a few friends, I am devoting 2014 to only working on models for Proxie.  I got a couple of widget orders to work for the rest of this year, but it is time to see if this thing can fly on its own.  With any luck I will be getting some people who I can swear to secrecy and train in the methods and we can crank these things out.

This means from start to finish every aspect of creating and producing models can be done in house.  Very few people operate this way, and I have been lectured about how stupid I am more times than I can count.

By this time next year you will actually have in your hands Proxie models. Hopefully several choices too.   I am now trying to figure out a way to make them luckier than other models.  So they roll better in combat and rarely fail morale checks. Few companies bother to add this feature, and I have suffered with unlucky models for far too long.   More on that later.

It also gives me another chance to wish everyone a Happy Holiday Season.   Don't worry about the calories, we can all start exercising next year!

Merry Christmas- let's get the new year on the way!

Hello again to whoever stumbles upon this little blog. Today I want to give a summary of the year, give more of my uneducated and mostly wrong opinions, and lay out the future.

First off, the year has been pretty good. Sales over 2012 are almost double. There are still some huge ups and downs. October was the best month ever, and this December is going to be the worst. There are spending cycles in all businesses. It is not for the faint hearted to be on the roller coaster of small business. Feast and famine is the norm.

About 60% of sales are for custom parts for folks. The rest are mostly bases.  For the most part terrain is being done by about a million companies right now so those sales are hit and miss.  The walls for hero clix are not too popular in the US.  And I mean this in a serious way-still waiting for the first US buyer to order. I have had a couple of overseas orders, but none in the US. Discouraging for sure, but also a learning moment.

15mm sci-fi is more sizzle than steak. When I go into my local store and see games on a regular basis I will admit it has arrived. Until then the reality is that 28mm sci fi is the standard.  I personally love 15mm sci-fi and would like to keep picking away at it till I have a range, and then maybe it would someday gain traction.

So that leaves me with the fact that the only thing I can really try to do to make an impact and be different is to make figures. The machine is perfect size for them and it was always my ultimate goal to do them. I just kept getting sidetracked on all the other things. Plus it is a really tough thing to figure out. I pretty much think I have it sorted but have to execute. And this takes time, which seems to be in short supply.

The wild card in all of this is kick starter. It seems not a day goes by without a new company being created and getting a kick starter going. This is going to really be a challenge for me going forward. The pool of discretionary spending a person has is finite, with few exceptions. Choosing to spend here means not choosing to spend there. From talking with some folks in the industry it seems kick starter is here to stay and a force to be reckoned with. If you are not in on it you are not long for the world, because that is where the action is.  People seem to love buying stuff off kick starter. They vote with their wallets.

And it is a reality I have come to terms with that my values are not commonly shared regarding out sourcing. I should clarify that trade between comparable societies is great. It is when a worker form western Europe or the US/Canada is forced to compete with a 12 year old chained to a machine in Laos that problems arise.  I was sent to  Walmart  to get a cheap TV the other night after Thanksgiving dinner. I can assure you that price is king. Nothing else matters. I failed my moral check and fled with out securing my primary objective. It gave a feeling of despair at the state of humanity.

Kick starter allows even small start ups to get goods at a remarkable price. The cottage industry in gaming has matured in to an international profit machine. It may be impractical to even think about making things, when some one else can do it for less than the cost it takes me to. I do it for the intangibles. It is one of those things that if I have to explain it...........also I am a little too damn stubborn to know what's best for me. At this point the money is not the point.  and if I have to explain that............

Let me give you an example: here is a pic of my recent slot car demonstration at the Fairgrounds the other week. It is another niche hobby very similar to the gaming hobby of 20 years ago. 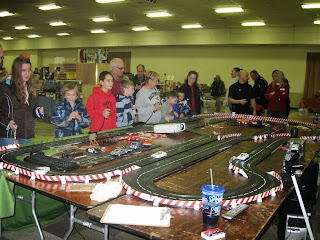 Again I found myself in  Walmart waiting for an oil change and wondering the aisles. I came across a 1/24 scale Corvette for $9.99. It was full function radio control. Now if you think about the cottage industry that has grown up around the slot car hobby there is no way anyone can come close to making a radio control car with licensing and full color packaging for $10. It is impossible to make a resin body in 1/24 scale with no packaging for $10. I think HO resin bodies are more than that. If the slot car hobby goes mainstream so that Walmart is carrying the cars- all bets are off.  $10 cars will put an end to most all of the cottage guys overnight.  Is this where the gaming industry is at right now? Maybe.

This is the reality of the economy today. And kick starter has let the doors wide open to the flood of ultra cheap imports in to what was a cottage industry.

So that is the challenge. Now how does Proxie Models plan on surviving this? (heavy drinking is not going to work)

A couple of things.

1. Direct to customer.  If at all possible I am going to avoid going through distribution. The cut is too much and will mean I have to raise prices.  I do sell to stores at a discount, but the distribution route is one I will only take as a last resort.

2. Technology.  There are some new things on the horizon and they are pretty exciting. 3d printing is going to make some things possible that were not a short time ago. I am most likely the only person making molds the way I am and the sculpting shortcuts are only found here. I got a bit of an edge in that regard. Not as big of an edge as the guys who have all the expensive software, but I do what I can.

3. Networking.  Teaming up with the right people who share the values and goals I have. That also means ending partnerships with people who are going in different directions. I have met a lot of people over the past few years and need to build a team. Others are not of any benefit to me and simply want to find a US based sweat shop.  Finding the right partners is going to be a huge asset.

4.  Cost saving. There is just no way to waste money with out passing that cost on to the customers. Every time I can save a penny it helps the bottom line. Luckily I was born in to poverty and have a lifetime of experience making do with little or no funds.

5. Time saving.  Time is money. Wasting time on the wrong projects is my biggest failing.  And I do this over and over. A lot of things are going to be done for the fun of it, but once in a while I have to make something that works and sells. And no more solitaire.

6. Market flexibility.  There is a variety of small niche hobbies that can be catered to. I plan on making at least a few items for this and that as time allows. Not having all the eggs in one basket will help if things go all wobbly in any one industry.

These are a couple of steps in the direction to keep afloat until kick starter fizzles out or I face reality and do my own kick starter as an act of necessity. That will be determined sometime in the summer.

To that end, here is some pics of the development process for the stealth troopers. 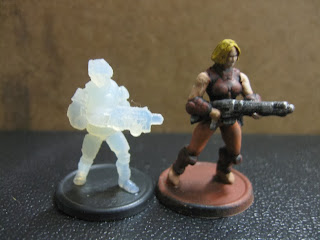 Here is the first print next to the girl figure I made. He looks a  little small. I upscaled 120% and printed it out again. 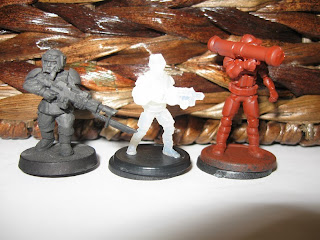 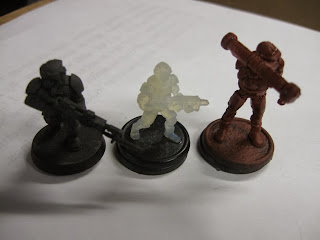 In each of these pics the larger size guy is painted red. At this point the arms, head, torso,  and weapons are looking close to the GW "heroic" scale pictured on the left.  Just need to get the legs shorter and fatter and have another print done. Then I will be watching this mold come to life.

So with any luck 2014 will be a better year, which is going to be amazing. This year I should also be able to hit some shows  and say hello to people.  There are a few products I want to have on the store during the year and I will keep this blog updated when they are released.

I hope this post did not seem pessimistic, it is important to face reality head on and make choices based on it. Overall the industry is in transition and I plan to dance right along with it as long as I can.

So have a great Holiday Season everyone. Let's all roll in to next year and see where it takes us.