Playing around with torsos 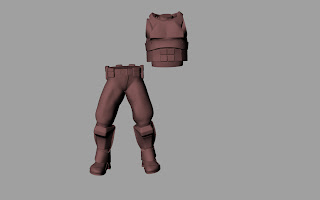 Just messing about with the design software while I am cutting the tank out and came to an understanding. This sort of figure is OK for plastic multi-part. The female Amazons are not. There has to be a nice clean break where you can seperate the parts, like this beltline.  I might not be able to ever do a decent set of multi-pose Amazon figs without resorting to single part figures., or making dividing lines at bad spots that show.  And they both usually look somewhat lousy. Currently thinking about how to make them and not have them look lousy but drawing a blank.
This  pic is a generic medium sci-fi figure. T-shirt and flak jacket will most likely have arm and shoulder guards if I get around to it.  I think this might be my next test project to get more practice with those complex organic parting lines. The troll was quite instructional in this regard and I am anxious to try my hand at that again.  I am not going to give up on this till I have piles of sci-fi and fantasy figures to build armies of extreme size. Or until I have a pile of scrap aluminum from failed molds large enough to build a house with.  So far this has been an interesting year of learning this process and give me another decade or so and I should have it down pat.
And I wanted to let you know that any orders over Thanksgiving will be mailed on Monday, as I will not be available to check e-mails for a few days.

Have a Happy Thanksgiving everyone. I know I have a lot to be thankful for.
Posted by Ken Krout at 2:50 PM 2 comments:

6 hours in.....and a gunfight at the CNC machine 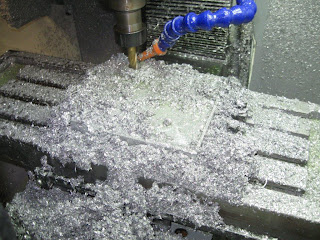 Feeling a bit chatty so yet another post.  Just wanted to show the amount of time it takes to mill these things out. This pic is taken after about 6 hours of hard cutting. Still got a very long way to go, but it will get there.
So I am in the shed minding my own business and this guy runs right past my foot. 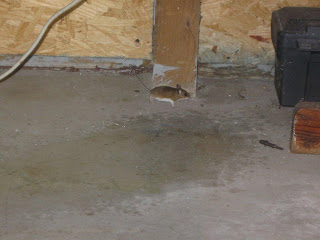 This is the most brazen mouse I have ever seen. He keeps strolling back and forth right in front of me. I am pretty cool with nature, but mice tend to build nests in stuff so I decide to get rid of him.  I pull out the CO2 pistol and fire 2 complete reloads at him. That $14 walmart special is so inaccurate it is absurd.  (I was rolling very bad to-hit dice).  No wonder it took me a month to hit that gigantic snake last summer. 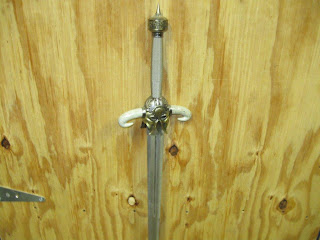 So I break out this broadsword.  I know, you are wondering why I keep a Frazetta broadsword around. Well clearly for situations like this. This darn mouse still refused to leave, and I am hacking at him as he runs around. He eventually left after I managed to nip his tail. That is the toughest mouse I ever saw. He was fearless.  I would take my cat out to battle him but the cat becomes frightened upon leaving the house and has no claws.  Why do I even keep him around?
So while you might think running a little model shop is all fun and games- it is not. There is some grim work at times.

Have a good weekend folks.
Posted by Ken Krout at 5:11 PM 2 comments: 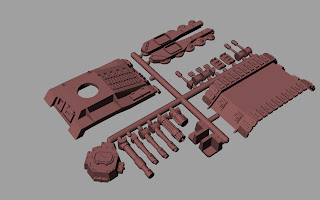 Had some questions about the new tank, so thought I would share the sprue layout.  Only issue I see is if I can push this much plastic at a time. If it will not fill some of the gun options will have to go. 3 guns for the hull , 3 for the turret, and 3 for each sponson seems like plenty. The small hatches fill in if you want a tank without sponsons.  There is a small ledge under the hull top to locate the side wheels to.  Let's see how it goes.
Posted by Ken Krout at 6:51 AM 3 comments:

The house of pain. 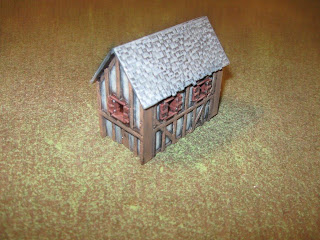 As in pain in the butt.  This house mold showed me the limits of my plastic pushing ability. It simply was not able to fill all the cavities. I tried every trick I could, stretching things to the limit and it still could not do it.  There was a little Scottish voice shouting at me from down in side the machine- "She can't take it Captain! She's going to blow."  I exhausted my extensive vocabulary of profanities to no avail. In the end I wound up filling in the chimney cavity and making the building without a chimney.  It still turned out OK, and it is nice and thick. It will be nice to mangle with pliers and make ruins. I made a box of them and they are in the store now.
Also, I will be doing a few more custom sprues so my own stuff is going to be sporadic. I really want to do the Amazons, but it seems that it is going to be hard to seperate the torso at the waist without a nice thick belt or something.  And what sort of gamer wants Amazons without the classic beach wear armor? I am going to keep at it, but it does not look like I will make Christmas. 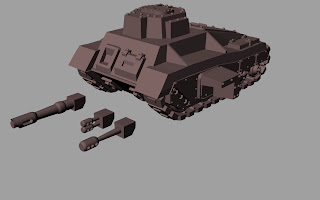 Here is the latest work on the Mk2 Trencher tank.  Sponsons are removable and there are 3 weapon variants for hull and sponsons.  The ribs supports in the corner might be impossible to mill, but I will give it a go.  Going to have a short siege gun, long barrel gun and maybe even a multi-barrel mini gun.

This is going to be my next mold, IF things go right- ( and that never happens) it should be available soon.

It has occured to me that if I had a few clones around here I could get more done. But- what is to keep them from forming an alliance and overthrowing my rule?  Until then what gets done gets done. Better to have too much to do than a swarm of murderous clones treacherously plotting against me.

Take care folks, will post again when anything of note happens.
Posted by Ken Krout at 11:35 AM 2 comments:

Back from the show

Hi folks.  Well I am back from the weather challenged convention of Fall-in. It was very nice to be there. I got to thank Rod from Highlander Studios for the sharing of space and for listening to my endless talking.   (http://highlanderstudios.blogspot.com/)   The attendance was light due to the unexpected snow fall but I guess it could have been worse. There are no more Trencher tanks ... until the release of the new trencher mark 2. 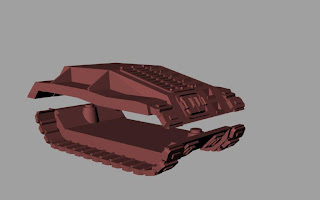 This design should be a lot better for you guys to build. It will hide the parting line, run faster because the walls are .080 thick and still be a nice solid feeling tank kit.  There are 2 side pieces to glue in after you attach the top to the bottom. If at all possible there will be a few weapon options and I am trying to keep the sponsons optional. If the mold will fit it look for a dozer blade. I am trying to add more detail but I am unsure how much will come out in the mill. Should be cutting next week, starting on Thursday or so.  There is also going to be an attempt to produce this tank in resin for 28mm gaming. That way no matter what scale you are in you got some nifty stuff to use.
Right now I am finishing Lucky Joe's house. I think the mold looks great and if I can get out of fixing my nephews truck and putting a roof on my son's house I would like to have it on sale this weekend. However, expect a slight delay.......
I do read the comments and take ideas, but for some odd reason I can not leave comments in my comments section. I just had to make the house after seeing Joes blog with all the buildings on it.
http://ljshobbyspot.blogspot.com/

Not a lot more pics to share right now, but will post a pic of the house once I get one painted. I have a ton of ideas right now and it will be nice to see them become reality. The Amazons are going pretty well, but that design is taking a while. Once I see how that goes look for some sci-fi plastic women. And the new stalker tank is going to be even more extreme........

One last thing......at the show I sat next to Don from the Goblin Factory. His halfling pike block is an absolute must have. It took an extreme force of willpower to not spend all the money I made from selling at once by buying these little guys. I do not have a web-site for him but if you get a chance to buy them you are in for a treat.