Getting hit a lot-but in a good way.

I noticed an unusual spike in hits when I checked the blog. In the stats section it indicated that most of them came from a forum called Dakka Dakka. I have been on there a few times looking for rumors when the new version of WFB was being released. Thanks to whoever posted a link there.  To answer a few questions; battletech bases would be easy, I just need to know the size. I have also been planning to do a base for 3.5" action figures with a small post to stand them up on for display.  The trencher tank measures 2" long and 2" wide to the outside of the sponsons, the roller is 2" wide and 1.25" tall.  And I have gotten several requests to do 6mm stuff. Will put it on my list.
I am planning on completing a range of alternate history WW1 vehicles in the near future, so that will be my primary goal. Infantry in greatcoats and masks to go with the vehicles is also something I want to do. To make things even more hectic, I do plan to release a scattering of 28mm multi-poses if possible.
Cutting out the stalker today I took time to paint up a few of my little tanks. The one in the middle has the driver hatch open. It looks neat but I do not think it shows up too well. 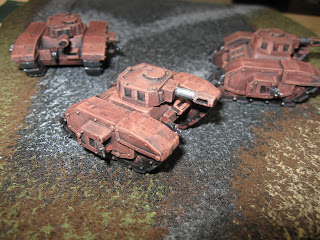 Right now I am boxing up some stuff.  I have filled all orders and will ship the last in the morning.  I am however completely out of tanks and have to make more in the morning.
Here is a pic of the stalker prototype. The tracks are a little different on the new one. It comes with a short barrel if you want to make a normal version. I like the one shot-one kill armor destroyer gun. 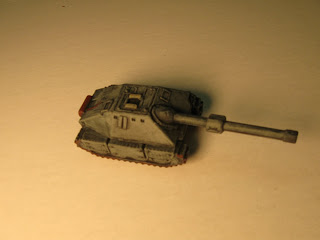 With any luck I will be able to get the right stuff in each box, not get killed by the plastic machine and have the stalkers in the store next week.
Posted by Ken Krout at 5:33 PM 3 comments: 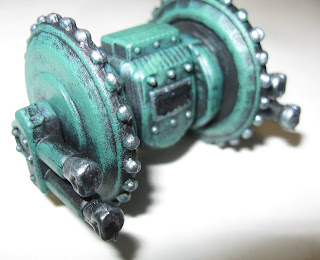 OK, so I am posting 2 days in a row. Maybe I am getting caught up in this whole online social networking thing.   Here is a pic of the roller tank, now in the store. It was a bit easier than the trencher so I priced it a bit less. By a bit easier I mean less cut fingers and cursing. I realize I have got to have the most shade tree mechanic operation on earth, but you got to do what you got to do.
I had some issues with the nitrogen. It is pretty good stuff, but getting the ratio down is tricky. Also, the stuff sometimes keeps on swelling even after it comes out of the mold. I got a pile of pregnant looking roller tanks setting in a pile. If for some reason you might want a swollen bodied roller, send me a message with your order and I will throw in an extra body while supplies last. I had to go back through all the tanks and pick out the bad ones. Grrrrrrr.
The good part about the nitrogen is it seems to allow me to create larger solids than previously without shrinkage. I had to fight with the alignment again, but I think it is acceptable.
I think I will cut a new tank on Tuesday. With the new 90 pin die and a bag of nitrogen I am feeling stupidly optomistic.
Will post more when something happens.
Posted by Ken Krout at 5:04 PM 3 comments: Well I finally got around to posting on my blog again. I have a lot of things in the works. First off, thanks for the heads up on the billboard, I removed the crossbrace because it was snapping too easily when trimming the sprue.  I made up a few tanks today, going to add them to the store. Had some issues with the one side of the track slipping out of alignment a bit. However, the rest looked fine and I trimmed it up with my pocket knife in a few seconds so I am going to go with it. Would hate to spend another few weeks cutting a new mold for something trivial. I am going to work on it a bit and see if I can close it up some.  The little guns on the side sponsons need a bit of a trim to slide in easily too. All in all, I kind of like it.  It takes a bit to make because I have to run it in manual mode.    This tank is run using a nitrogen additive to prevent shrinkage. It is pretty neat stuff. The gas bubbles expand during the heating process and help keep sinkholes from showing up. It has a few tricks to using. When setting in the barrels it seems to keep expanding and squirting out, so you got to RUN this stuff because it wants to come out ready or not.
I have been wondering about what is a good price for a 15mm tank, given how much it takes to make them. I am going to sell them in a platoon of 3 for $10 via the webstore. I had not realized how much the various fees would run up on E-bay and the web site costs, etc.  The ones I list on E-bay I am going to charge $11 for to help defray the cost of E-bay fees.
Not sure how that is going to work out, but it is still 3 tanks for the price of one Flames of War tank. It is even less than Old Glory too.
I got the wheeled roller tank setting ready to go soon. I ran some prototypes of it the other day and plan to make a production run for inventory in the next few days. The tank destroyer with the huge gun will be up next for a new mold and then an APC and self propelled massive artillery piece. I might make another sponsoned main battle tank too, because I had another design that looked pretty neat.
I am also getting mildly excited about my slot car angle and plan on making stuff for that too.

Anyhow, that is the latest from the barn workshop.
Posted by Ken Krout at 3:28 PM 3 comments: 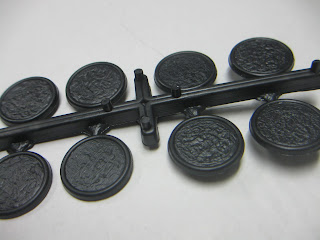 Today I made about 100 of these sprues and added them to the store for sale. Kind of a simple design, but for some reason this mold gave me a lot of fits before I found one I could get to flow evenly. In the end a simple straight runner with parts spaced along the sides worked best. With 25mm rounds finished I have all the base sizes normally used for gaming done. Now I got to start working on the guys to stand on them!  That is a bit of a tall order, but I like challenges. I have been working n a brainteaser from the back of Omni magazine since march of 1983. Not continuously of course, that would be obsessive.
These were made with the old fixed pin ejectors. I am running a new trencher tank mold for the adjustable pin die assembly. Unfortunately, the CNC started making a bit too much noise so I shut it down to do some work on the drive asembly. If everything would just work right all the time things would be more pleasant.
After trying for too many times to find someone to design models, I think I am just going to knuckle down and do the work myself. I have everything down except hair and hands. The hair could be solved with some snappy hats and perhaps mittens will make an appearance in a distant galaxy. Actually, it would be best if I knew how to do each step of the process, so time to get busy.
Posted by Ken Krout at 5:26 PM 2 comments: