Well, I have chased the gremlins back to the pit from whence they came for the time being and running full ahead full.  Who knows for how long, so I got to work while things are working.
I sent out a couple of widget samples and found myself with a little time to kill waiting to see if I get the Ok to produce. I took the time to play around with the grey plastic and see if that grossly oversized mold would work. 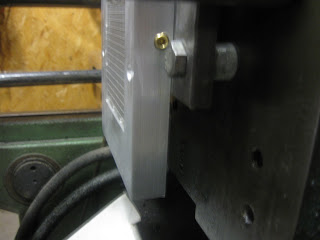 As visible in this picture the mold plate extends past the backing die plate and sort of floats in mid air.  This seemed like a good idea at the time, and it does sort of work. It allows me to make one object and avoid the central injection point problem.  It does decrease the strength of the clamping force but as described in an earlier post this can be effectively surpassed by making the parts thicker and sturdier. The pressure required to inject into a thin narrow passageway is what blows the mold open.   I like the parts sturdier anyway. I mean, my minis look a little "fluffy" so why have thin buildings?

The point is that this extra bit allows me to make a nice single large part, even if my plastic machine  looks a bit like this guy's car. 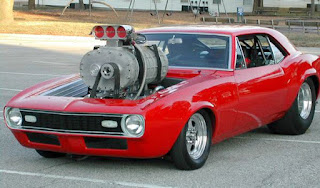 Seriously-this guy takes pushing the limit to a whole new extreme.  And if that super charger can fit in that Camaro, a slightly larger plate can fit in my die assembly. The main issue is that the ejector plate now only pushes on the top half of the part and I got to keep the bottom smoothed out so it does not stick because there are no pins reaching the hanging down area.

And this is why I hope no "real" engineers ever stop by. They will blow a gasket looking at this junk yard mess. It is best to avoid smart people, that way you do not get told about your mistakes.

So then I mixed up some of the neutral plastic. You have to mix the color in a 50-1 ratio.  I swirled it around and all it looked like was a few grey pellets in an ocean of white pellets. After running it though the machine the parts started changing color as the black got worked out and the grey came through. 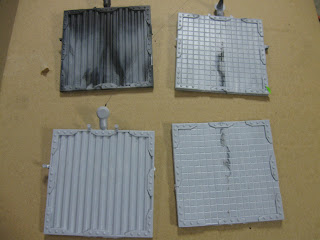 Looking at the bottom left one it shows the injection point which is in the center of the die. By hanging to one side it allowed the plastic to come in from the side and me to make a nice chunky bit. 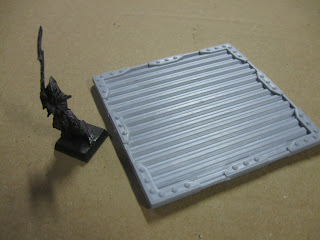 This shows how big the part is next to a 28mm fig.  This is the reversible roof/floor part..  I was going to make the sides the same dimensions and have them 2 stories, but maybe I will make them one story and stackable.  This is some day going to be part of a generic pre-fab set of parts for futuristic gaming.  A future without skulls.  I like finally seeing grey parts, even thought they will be getting primered black someday anyhow.

I also made a few packs of DBA bases because they had run out and were off the store. They are back in now. I am going to the new server in December and will be able to have more stuff.

Finally, let's take a moment and look back in gaming history to the early days of fantasy wargaming.  This is one of my first regiments for WFB. 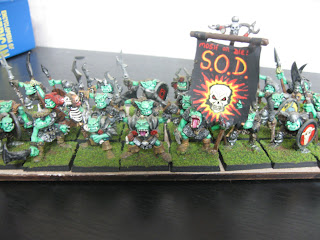 Sold for about $20 for the entire regiment of metal figures. Named "Ruglud's Armored Orcs" on the package, I personalized these lads and morphed them into the infamous "Stormtroopers of Death".  They had a theme song.  "March of the S.O.D." of course.

That lad in the front waving 2 crazy swords is the nefarious Sgt D.  A shield would only protect the hapless foe from his left hand, and who would want that. This regiment would often brutally attack their own line of goblin skirmishers just to get in the mood before a scrap.

This was before the tournament movement swept through gaming and made silly little regiments like this obsolete.  I kind of enjoy the story telling aspect of gaming more so than the tourney part.

In case you could not bear the thrashing or understand the words, here are the lyrics to "March of the S.O.D."

Ruthless and vicious, he'll stomp on your face
Deadly, malicious, stay outta his space
He'll rip your eyes out, dont you look the wrong way
And once you meet him, there's no time to pray

He'll rip your heart out, make you eat your own lips
He'll crack your elbows, and crush fingertips

Don't cut the line, cause he'll cut off your legs
Don't waste your time or you'll spend time with the dead.
Don't try to trick him cause he'll fill you with lead
Don't beg for mercy, he'll piss on your head.

He'll kill your sister, then mail back the tits

He'll beat you senseless, then break out the whips

He'll pour gas on your kids, then throw 'em a match
He'll back the car over grandma, the dissect her cat
With his Stormtroopers of Death, they will come to your town
Their Uzi's rip through flesh, then it's time to chow down

Their cause is justified, their reason is clear
The word 'revenge' is all that they hear

Have a great day and enjoy the hobby. It really can be a lot of fun.
Posted by Ken Krout at 8:45 PM