Boy have I been busy. Work has become 7 days a week, in addition to making and shipping products every day.  There is a distinct possibility that my next day off the day job will be upon retirement.

A couple of updates;
First on the meetup. I had to leave that platform because they were spamming people with resist messages regarding President Trump. It is not the part of a social network platform to interject themselves in to things. The owners of meet-up offered free services to anti-Trump groups and even created them to help foster the resistance.  Not sure about Trump at this point personally, but pretty sure meet-up crossed the line by spamming my paid for group.

Second on the demo. Attendance was a disappointing 0. Not sure why, but starting to reach the conclusion that this avenue is a dead end. It is obvious the local community is not going to produce any people who have an interest.

Third.  Got another rejection on insurance. This one was looking good until they discovered I make the plastic parts. They assumed I merely assembled them. Luckily, this dovetails pretty well with point 2. Insurance is not needed if there is no one to get hurt.

Ok, that is the bad news. It is strange to hear reality online sometimes. The world is full of false impressions that people try to create. It is something that has gotten a bit out of hand, to the point that most things online are a deliberate attempt to create an overly positive spin.   This blog tells the dirty and painful reality of plugging along one step at a time.

The plastic machine has died. It stopped heating up, and the breaker was thrown. Trying to reset it caused it to trip immediately.  With no manual or wiring diagram it was going to be tough to troubleshoot this. Compounding the problem is the fact the machine is 44 years old and has been used hard that entire time. There were so many sloppy repairs on the machine over the years that nothing is as it should be. 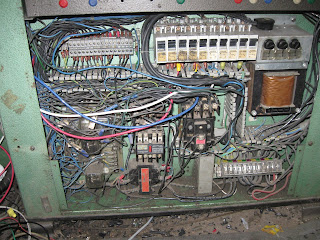 Except it is 3 phase. In case you are wondering, 3 phase electric was invented by Tesla after drinking a case of Vodka and wondering through the forest eating hallucinogenic mushrooms. He thought it would separate the real electricians from the pretenders.  Regular 110 electric has a hot and a ground.  Regular 220 electric  has  2 hot and a ground. Three phase has 3 wires, all of which are simultaneously hot and ground. Apparently.

Yeah, this one was a puzzler for sure but everything worked out in the end. Someone had wired all the heaters to the same phase, which is not as efficient as using all 3 phases. I am going to wire each of the 3 heaters to a different phase, which is going to save electricity and make pre heat up take a lot less time.

Than there is this part. 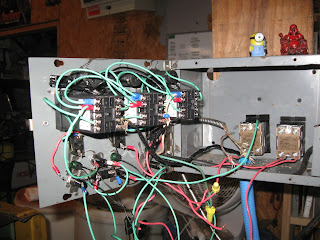 I actually re-wired this before so it is easy.

And here is the problem, after much trial and error. 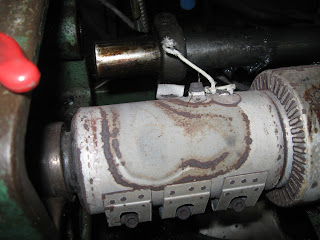 The wire on the heater band is shorting out and is broken. New heater bands, relays, control units, and switches are on the way. When done it will be better than ever.  The parts are going to take a while to arrive. They were ordered from Amazon with 2 days shipping. But that means they will arrive 2 days after they are shipped. And they are not going to be shipped until mid to late June. So inventory is going to be stressed and things are going to get a bit crazy. Already 20mm rounds are out of stock and it looks like a couple more are going to be out before things get back to normal.

And now the good news, besides the crushing Gremlin defeat already detailed.

I am in preliminary communications with someone who might be a huge help and catapult things in an amazing direction. Online of course, the locals are no help.

The current obstacle is the day job. But that is being sorted and should be better in the near future.

In spite of the negative comments at the start this is a positive update. In many ways the things that I failed at are not meant to be. Not having helpers is probably better in the long run.

Shipments will reach 10,000 packages sometime soon. Amazing, and I have to again thank all the people who are out there who keep coming back for more bases and bits.

So there it is, another great summer is on the way. I hope you all enjoy it.