Today I make a fatal error, and here it is!

OK, I know this is a huge mistake but I wanted to clarify my previous China outsourcing post. Thanks for the feedback guys, it is always helpful to hear other points of view.

Let me preface this by once again declaring that I am not the most educated person on earth. I quite stubbornly endured 10 whole years of the government mandated abuse known as public education. Then I realized that at age 16 I was eligible for parole and walked out.  My rejoicing that day later inspired a noted Mel Gibson film.

So here goes.  Global trade is a very good idea. It helps everyone. Check out this guy from the UK making some really kicking slot car chassis;
http://www.chase-cars.com/

You got to see the video-  https://www.youtube.com/watch?v=hAxGHa4q20k

He wanted to make slot cars that handled like 1970's era American cars. So he did! And a real car does handle like that if you remove the sway bars and shocks, and fill the trunk and back seat with bags of cement.

The point is it is cool and I could buy one.

Trade between nations with similar standards of living, similar workplace safety regulations, similar environmental standards, respect for each others laws, and a somewhat similar wage scale is very good. It really works out great for all involved.

An unbalanced trade between countries who are not similar will result in a very unfair level of competition.  Throw in some government action to deliberately de-value the currency and it really starts to become a no-win situation.   (luckily our government is skillfully de-valueing OUR currency too- take that China!)     In the future the wages of China will grow and the wages of their trading partners will drop.  Very good if you make a living day-trading stocks. Not so good if you are an average worker. At some point things will level out.  While they do a lot of creative destruction is going on.

I was at a job interview once and the boss yelled at me and called me ignorant because I complimented him on keeping manufacturing here at home. Turns out his tiny US factory was a token presence so he could bid on defense contracts and all the real work was done in low labor and no regulation countries.  I wanted to tell him a few things but thought it unwise. Maybe I should have because I did not get the job. I keep getting lectured about how I do not understand the global economy and all that. I have shipped about 600 packages to date and a staggering 0% have gone to China. In fact I will gladly post on this very blog the day I get an order from China.

A global economy is what we will have someday. Right now we have a mess.


So that is my take on things. As for the "we can not do it anymore" school of thought just ask around. The guy at the window at Wendy's handing me a frosty most likely worked on the space shuttle back in the day.

And that brings me to the next item of interest;

I picked up some little tanks and some walking robots off of these guys before. I liked them, but the tanks were too small for 15mm and the walkers were 54mm scale and a bit big for 40K scale. I am going to use the walkers anyhow. And now they are making some nice terrain pieces pretty similar to the ones I am plodding away on.  Damn. My stupid procrastination has resulted in being beaten to the market place.

I am going to finish up some more widgets and get cracking. The reason I like making widgets is they are big and fairly easy to design molds for.   It is much easier to make a large item than try and cut nose rings on a elven face for example. And I get to sell a pile at a time so I can use the widgets to fund some much more interesting things.......

I hope some unemployed person comes along with a desire to learn all this crap and a ton of free time to help get some things done.
HOWEVER- I will say this. If you hire a lot of American workers you only get the use of one hand and 30% of their attention. The other one is holding their smart phone in a death grip while eagerly waiting for a text message from a casual acquaintance. Do I sound like a crotchety old timer or what?  I try my best to act my age, which means I can soon call people "wipper snapper" and chase them with my walking cane.

In the meantime let me share with you a picture of a widget mold in progress; 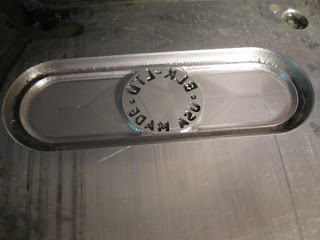 I promise not to turn this blog into a occupy Wall Street propaganda outlet or anything of the sort.  Reaper is a great company and I wish them well and did not mean to disrespect them. They got to do what they got to do.

.  Going to post some battle reports soon as I am itching to get out the whole city and fight some battles.  Been re-reading some Dan Abnett and he always gets me going.

And with that, I will sign off and get back to plotting some more mayhem

Just a general statement of how it feels to be an average blue collar American trying to swim against the surging tide of out sourcing.

I finally broke down and bought in to one of those "Kickstarter" deals. It was for Reaper minis "Bones" promotion. I always loved Reaper minis and thought they were in Texas. It cost a bit, but it was a good deal and if I can help a fellow company out, great.

Then I go this in an e-mail;

200 of the masters left for China yesterday! :-) We think that will give them something to do for a while while we get some sculpting finished up.

We sent in a big PO for the 29 Bones models that we can get, just so we have lots of inventory until the rewards castings come in. This also gives the Chinese factory something to do while they start making new molds too. Because you folks wanted to see what they were like and started buying them, we've run out of two models already!  "

Soooooo.  I sort of felt like I had been punched in the gut by that guy from Rocky 4.  I really should have researched this first, because I NEVER would have supported this if I knew it was to outsource production from Texas to China.

I could write a hundred more paragraphs today about this, but it will not matter much.

Let's just raise a glass to the memory of a workforce and an economy that is gone.  There are a couple ghosts and shadows still trying to hold on, but our days are numbered.