Ok, so it has been a while. I managed to keep my mouth shut over the election so as not to alienate anyone.  People get uptight real fast and foaming at the mouth seems to have become a national pastime. But keeping my head down and mouth shut no one was offended. I hope. Anything you say will piss off someone, including saying nothing.   Thank God its over, although the next one has started I guess.

What have I been doing? Playing Oblivion. This is a great game and I put it aside when Skyrim came out. Since I beat the game of Skyrim's main quest I thought I would go back to Oblivion. Pretty neat to go through it again. My previous save game was from 2011 so I started a new character and made it to 13th level before becoming afflicted with Vampirism and had to retire. I could not bear being a Wood Elf force to guzzle healing potions because the sunlight is burning my flesh off. It was humiliating.

Just one tip; avoid the town of Hackdirt. I found this area and was given a hard time by the shop keeper. In fact everyone in the village is a jerk and the squabble escalated until each and every one of them lie dead and their meager possessions were looted. What a crappy town.

So last time I played video games was during a period of healing, and this time was no different.  I stopped for an oil change and the mechanic tried to sell me an air filter. As I walked out to tell him "no" a bad thing happened. It turns out there are these large holes in the ground under your vehicle, placed so as to swallow up the unsuspecting. Let me tell you something, 32 feet per second per second does not really sound all that fast, but it feels like it. Luckily I made my saving throw and only took half damage. By grabbing my truck bumper on the way down I managed to dangle by one ankle and a few fingertips and pull myself back up. My knee bent the wrong way and took all my weight, tearing some ligaments. The ankle was also twisted around and got all purple and swollen. So it had to be elevated and hence the weeks spent playing Oblivion.

In the meantime I have not progressed on my mold very much. In addition to shredding my leg I got a promotion to supervisor at my day job. Apparently supervisor means "person who fills in unlimited hours for missing staff".

But all is not lost. I seem to have a new enthusiasm for a project I recently undertook, which I will elaborate on as it comes to pass. Just something I am doing for me at this point. Pretty much everything I make is something somebody asks for or I want to have for myself.  It is just fun and creative and I find it very enjoyable.

There are a few new things in the shop. Some new pill bases and a damage tracker I made for Kings of War. 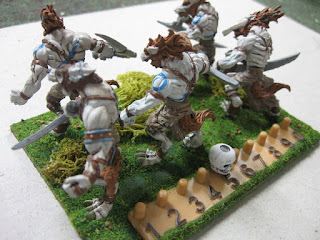 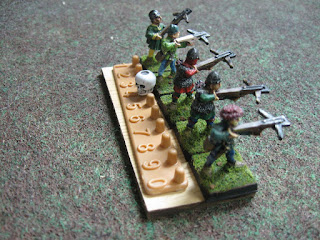 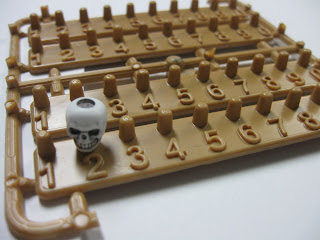 I thought they would enhance my troops a bit, but I have not really been able to stand much or find time to play. Just something little I knocked together one day.

What I am really focused on this year is getting some more people involved, and that means insurance. One thing my recent plunge into the grease pit has taught me is how easy it is to get hurt and how quick people are to sue. Almost every person I told my story to assumed I was going to call a lawyer, which I did not do. But it really drove home the fact that I have to be insured before opening my shop up as the Maker Space I want it to be.

So now it seems some of my posts on this blog were not that wise after all. Sure it is fun for me to talk about tricking out a milling machine by boosting it from 24 volts to 220, and preventing all my neighbors from listening to AM radio at the same time. But a potential insurer seems to balk at things like that.

Here is a typical conversation-

[insurance person]  " Ok, so you want to take discarded industrial equipment with unauthorized modifications, and then invite total strangers in to your home to operate this equipment. And, I might add, strangers with no experience or training."

[me]  "Yes. And don't forget my discount for having a fire extinguisher and band aids."

[insurance person]  "Get out."

In any event, that is what has been happening. I will post more as things progress, or less if I find a cure for Vampirism. Sorry, but someone has to close those Oblivion gates.

I hope everyone has a Great Holiday Season.  Whatever you are doing, enjoy yourself. That is what makes life worth living.