Today, I took a minute to be calm. I needed it. 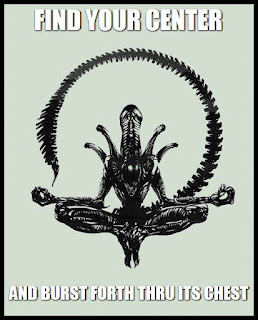 I get a lot of questions from people who want to do the same thing and make their own stuff.   It is in the spirit of consumer reports that I continue with another report on the tools needed to do this, and how it helps to be immune to frustration.  It is also useful to have an extensive vocabulary of words to use in special situations.  My vocabulary was really enhanced thanks to my drill instructor, and I needed every thing he had to deal with this crap. 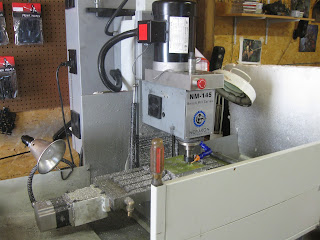 This is a Novakon mill.  I picked this up at a show and got the show demo unit.  The company is in Canada and I like Canada.  I might even be a Canadian someday if they would just lower their immigration standards, but that is another subject.....

First of all, it really looks the part. When someone comes into the shop it sort of gives the impression that this place might be legit.  It is big and heavy, and when it is working it is accurate enough to safely perform a vasectomy or whatever it is they use that "Da Vinci" machine to do.

But it is not made in Canada, it is made in China as are all of the components. The guys in Canada are trying to do the best they can, but there is a whole web-site devoted to this machine.

I mean this is one pissed off consumer to actually register a domain name and spend so much time keeping it running and all.  I have not had that bad of a time, and the guys have been pretty suportive. Still I can not really suggest you buy this.

First thing, it started missing steps. And when you are spending hours making a mold and the CNC decides to start cutting 1/4"  away from where it is supposed to it will ruin your day.  I fixed this by cleaning and lubricating the slides. They rusted within a few weeks, and there is no way to grease them.

Next thing, it had all the wrong parameters. Luckily there was a forum that had some helpful steps and I changed all the inputs. It seemed fine for a while.  The coolant tank leaked and still does.

Next it caught on fire. The limit switches were not sealed and were right in the path of the coolant. It was only a matter of time before something bad happened there. Not really a fire, just a lot of smoke and melting wires and fumes. That was the eaiest thing to fix, as all safety items are oprional and I removed the limit switches and it worked fine. The guys from Canada mailed me some new ones.

Then the power unit to the PC died. I scrounged one out of an old PC and fixed that. Then the graphics card died too. Back to the pile of old computers and back in business.

But 2 weeks ago the spindle finally died. It had been stalling and surging, but now it quit. The spindle is matched to this thing. 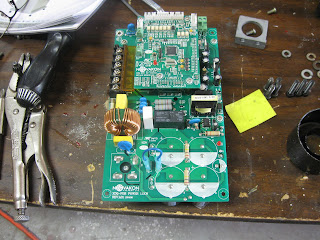 Now, figure this crap out if you can. This thing converts electricity into some type of 3 phase DC pulses. The pulses are modulated in such a way as to vary the spindle RPM's. And this board is made in China by a company that no longer is in business. OK.  Message boards are full of folks complaining about it too.  This is pretty complex. What is wrong with a belt and pulley system to change speeds?  Nothing. It has worked fine for years. New stuff sucks in a lot of ways.

BTW.  The 1973 plastic machine is still chugging along and this Pontiac is still trying to single handedly destroy the ozone layer. It has one engine warning light and if it comes on it means " My engine has run completely out of oil and needs replaced."

All of the newer cars I have ever owned are always complaining about something and wanting some high priced sensor replaced.  The old ones just broke without warning, as it should be. 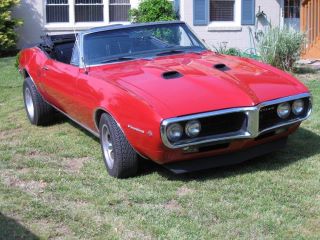 But I am off topic again.  As luck would have it the fine folks in Canada directed me to a fellow tinker in New Jersey. This man, like every American, decided to solve the problem by tearing shit apart. 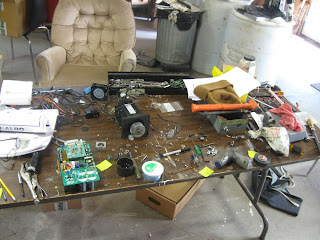 I took out of the back of this cabinet. None of it went back in. 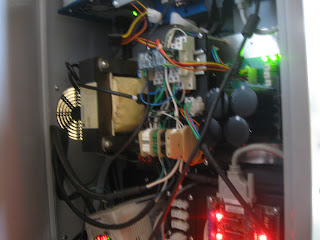 I have no idea what the hell any of this stuff is. The HUGE power coil on the left has "OUCH"  written all over it though.  Even I can figure that one out. 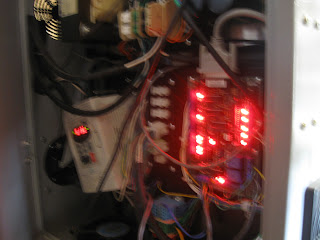 And check this out.  The freaking Hindenburg had less warning lights after the explosion for crying out loud. 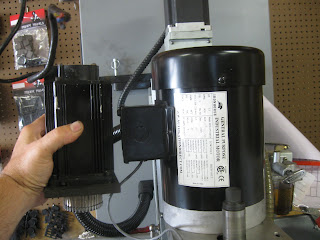 But with the other tinker's advice I got it put together.  I really like his plan in figuring out how to make this thing usable. The components came in boxes with very explicit warning labels regarding rating, and he ignored them and over powered everything! What a guy. Check out the old motor in my hand and the new one mounted on the machine. It had to be bolted to the outside with a  special adapter. Talk about an upgrade. 460 volt, 3 phase is not stopping for nothing. I have to make sure to keep loose clothing out of the way.

I even like the name "Iron Horse".  I spent some time in the field with a brigade named Iron Horse.

So it is working again, with a few quirks. But working at least. My advice is to shop around a little before you make the investment. They have a new model that is supposed to be a lot better, so maybe your results may vary.

I made the second part to the 28mm pre-fab buildings.  This is a basic piece of sheet steel with the linking rivets. Not sure how many different ones I want to make to put in the pack, but it is going to take a while to get them squeezed in between other projects.  ( and maintenance) 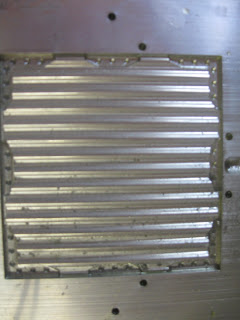 Also, I got an e-mail from Reaper and they are planning on bringing production back to Texas. I should not have jumped to conlusions about them. I had heard that it is easier to talk Smeagol out of his favorite jewelry than it is to get molds back out of China.  I hope they can pull this off.
I wish them luck.

And with that I am back to work. I got to see how the new "Iron Horse" is running.

Have a great week folks.

EDIT;  While I was writing the review posted above, the machine in question must have somehow learned of my harsh words. It made a 1" move to the left (for no reason) and proceeded to destroy a mold I spent a considerable amount of hours on. This is not the first time it has done this, and I am guessing it will not be the last.  Oh well, time to place a new block on and start over..................
Posted by Ken Krout at 1:50 PM