Today I took time off working on stuff to play a game. I am running a siege game at the Williamsburg Muster con and had to playtest it. A lot of fun and things seemed pretty balanced. I am hoping to finish the new tank on Monday and get it out to market this week. Next up is another building.
Posted by Ken Krout at 5:52 PM No comments:

More on the plastic machine

I posted a pic of the monster, and somehow left out the details of it. It is a 1973 Arburg Allrounder. It weighs about a million pounds. I got it off E-bay and went to the trucking terminal where they loaded it on my brother's car trailer. It was murder getting it unloaded without a forktruck. Trudi had to go in the house because she was certain I was going to get crushed as I slowly pried it to the back of the trailer and inched it to the floor using my engine hoist. Then I had to slowly smash the skid it was setting on to bits and get it to the floor, and again pry it to where it currently sets.
Naturally it did not work.  I first realized that it requires 3 phase electric, which my street did not have. The electric company wanted $40,000 to bring it to me. So, I picked up a rotary phase converter. Very tricky to wire up 3 phase, 220 volt electric. Then I had to fix the wiring to get the guns heating up.  They work now but one occasionally sticks and keeps heating up no matter what. I did not pay attention and it cooked the plastic inside. Very bad day that was, I thought it was going to go up in flames.
Also, the hydraulics did not work. It took me about 2 months to troubleshoot that and get it sorted.
And then there was the safety guard that was removed. This allowed me to again become distracted and place my hand in a bad spot. A lost finger tip and a few broken bones later I realized that I should replace the safety shield.
Right now we have developed an uneasy truce. It knows I want it to work its butt off to make stuff for me to sell, and I know it is waiting for another chance to smash and mangle me. Or burn me. Or electricute me.
But it works now. So its all good.
Posted by Ken Krout at 5:02 PM No comments:

Spent the day fighting the weather and my ancient plastic machine. I finished a new mold and added it to my web store. 40mm square bases for monsters. Made a box of them up and stacked them on my new ACE Hardware shelf which doubles as my inventory space. 2 more base sizes to go and I will have every base type done. Working on my latest sci-fi tank also. Got the new CNC set up but I am waiting on a clamping set and then I can cut 2 things at once. I am really hoping this one works better than the last few.
Posted by Ken Krout at 4:48 PM No comments:

The machine for making models. 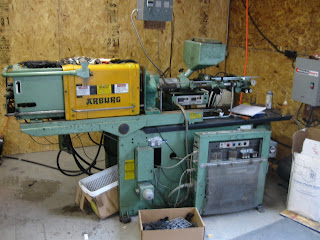 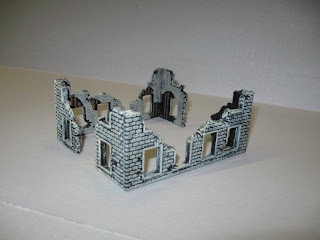 Welcome to my new blog, where I will try and chronicle one man's attempt to create things I like and hopefully make money doing it. This is also a place where I can inform people of what is next on the mill and what is working and what is not. Anyone with input is welcome to add it. I welcome all feedback, as long as it is positive. So far I have spent a small fortune on equipment and sold a small handfull of items.  I expected things to begin slowly.
I am currently working on perfecting my tank with side mounted sponsons, a new self propelled artillery piece, and another section for my bulding mold.  I will keep this blog up to date and see if anyone notices it.
Posted by Ken Krout at 11:30 AM 1 comment: