Hello again. Today I am starring in a short video filmed by my daughter. I had read a few forums about plastic injection molding and it often seems that there are these smart people stating facts.  I tend to avoid smart people if at all possible.  Life is more interesting when you do not let reality get you down.  In fact reality is entirely over-rated. The video is sort of a companion to the blog, kind of a guide to the hobbyist plastic molder.   Here it is; http://www.youtube.com/watch?v=7-g-SJ-P9Wg&feature=youtube_gdata

I have been trying to standardize some bases and have a few more sizes available in matching finishes. Some 40mm rounds and sci- fi biker bases, and a solid chariot base. 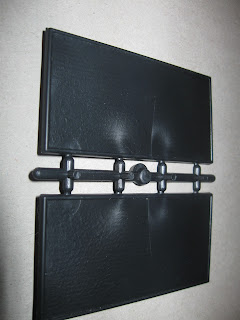 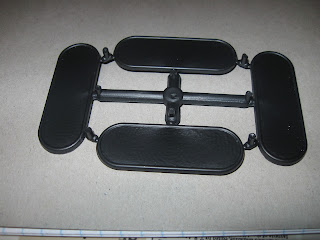 Most of my time over the past few weeks has been trying to keep up with making custom sprues for folks.  Really happy to have the business, but it seems it has been a while since something popped out of my head and onto my workbench.
The shapeways stuff has been a learning process, but in a way it also helped cement one idea in my head. That is concerning resin casting vs. plastic. They both have applications and I see where resin is much better in some ways. Looks like the "Big Boys" have gone over to all resin. But it seems kind of slow in a way. I think I will stick with plastic.
Going to keep pluggin away and see where this goes. Will keep you posted.

Well it has been too long since I last posted.  So here is what is happening. 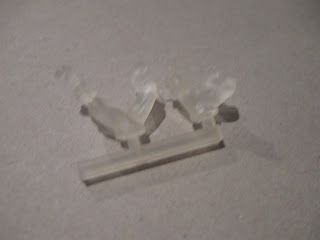 The parts came back from Shapeways and they were not good.  The legs were OK, and I was happy with the proportions. 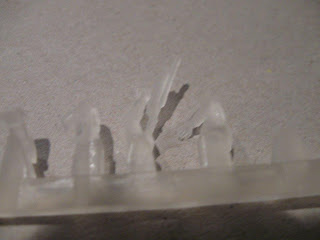 The arms looked too small. The guns were the worst. I knew gaming minis were a bit out of proportion but i never knew just how bad it was. I need to rework the models and give them ludicrous gun sizes.  You might notice the photos are a bit fuzzy. It is because shapeways is fuzzy. Everything looks like it is made out of lumpy pancake batter. And this is the frosted ultra detail. Wait till you see the regular stuff.... 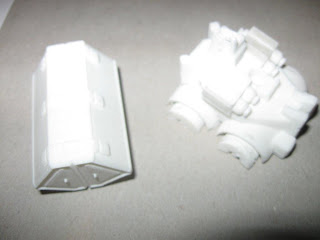 My plan was to look into doing some resin stuff using the 3d printout as a master.  I spent the weekend plotting in the laboratory of Dr. Oogan's secret workshop.  It turns out this entire model is made of an extremely lumpy material that does not even sand well.  Sand off the lumps and find more lumps underneath.  Quite a let-down. Even the ultra stuff had a fuzziness to it that was very odd.  I am looking into a different 3d printing service that uses another type of process and will see how they look.

Overall getting a real model in hand is vital before I commit to mill out out the mold. If I had cut out the figures I would have been stuck with puny guns. And we all know the best heroes carry huge guns like Dirty Harry.

In the meantime I am busy making a new line of uniform bases. It may seem odd to spend time making bases, but I seem to sell a lot of them, and they are easier to make. The Mark 2 tank has been very unpopular but the bases sell by the pile. So, even though I do not want to be driven by money, it seems to be imperative that I limit non-selling specialty items to a small amount.

The whole advantage of plastic is the ability to mass produce. That benefit vanishes when the sales volume is tiny for a particular item. Which is why I explored the option of resin casting.  Once I get some not lumpy printouts I am going to be offering some resin items for really oddball stuff.

In the meantime, back to the drawing board as they say. This saying seems to always follow in the wake of crappy results. But, taking time to see the figures will make for a better mold when I start on it.

I recently read a book called "Keep Going".  It seems to be a fitting title for days like this.

More news on the models as it arrives.

But now for important news. The tale of the ongoing struggle between my carefully hand built natural fish habitat and the filthy wildlife bent on despoiling it.  My fish have all been slain.  I looked behind the waterfall and beneath the lilies. Dead. All of them.

Perhaps a more agressive fish could survive the dangers...... maybe the Pacu.


Have a good day.

Well the leg is still there so I figure I best get up and use it once in a while.  Back to making things and planning even more things.  I made some 15mm DBA bases and put them in the store. I also re-made the 40mm round base with a smooth finish to match the 60mm round. I want to define it and place both in the store.

I sent all the infantry to a 3D printer and will wait till they get back before proceeding.  Also looking to do some odds and ends in resin. Like this cargo container and magnetic lift crane; 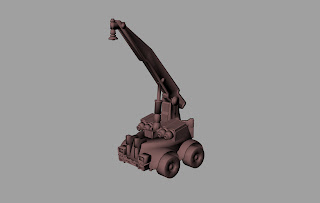 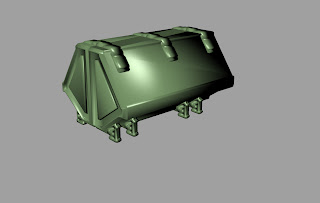 This is going to mark an attempt at working in resin. It seems to be a better medium for stuff that will not sell to many copies.  They are sort of smallish and would make nice litter for my sci-fi troops to be splattered and die against in a game.

Here is a concept of the new stalker tank; 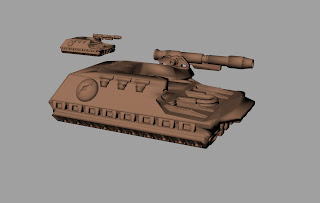 Yes it is a grav tank. No more limping around on tracks, it is full speed shoot and scoot.

These items are based off designs by Richard Jeffries.

Going to the Cold Wars show if they will let me in.  Will have an assortment of bases and with any luck the new crane. The tank is not likely, as this could be a bit of work to get done. I am trying to evolve into 28mm, simply because 15mm sci-fi is not as popular as it should be (in my opinion). Still planning to do some secretive non-sellable things in 15mm for my own use.   I recently had to try and figure out how to make something too big for my machine, and it can not be done. BUT, if I could sell a few thousand copies of a tank, I could make a 4 mold version of this tank in 28mm.  So that is what is most likely going to happen to the stalker tank here.
A 28mm tank selling for $15-20 should be in my near future. After I get the infnatry sprues back from shapeways. I just wanted to see the proportions before commiting to cutting on a block.

And in boring lifestyle news; 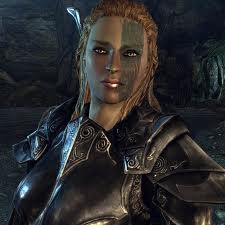 I  have to give up the adolescent life of the video game player and return to productive work.  I wanted to give a last bit of advice to anyone playing Skyrim.
The picture is Mjoll the Lioness. She is my new treasure carrier. Even ignoring the fact she looks like a cross between Braveheart and Bo Derek, and talks with a thick Bavarian accent, she is also immortal and simply a killing machine. The best follower in all of Skyrim. Lydia could get me into trouble, Mjoll also gets me into trouble but gets me out as well and leaves a trail of corpses in her wake.  Give her a few magic weapons and it gets scary.  However, avoid letting her carry any magic staffs unless you want to get them back out of charges. She opens up with a staff in each hand on any foe we meet, so I had to take them away from her.

I know what you are thinking. Was Lydia's death an accident? Or simply a conveniant way to dispose of her and make room for Mjoll?