New stuff- why I have been stuck 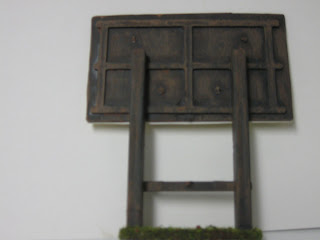 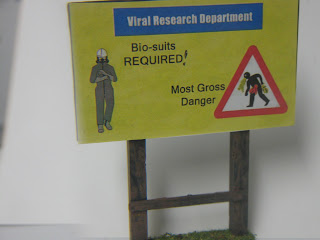 Been off the blog for a bit, but not idle for sure.  I decided that my first die assembly was not flexible enough and set about redesigning another.  Building a die is a lot of head scratching and fussing about, but I think it is going to work out. Above is the first plastic bit out of the die. It is a simple one piece mold of a billboard or sign, and it fits a business card on the front. I thought a warning sign would be cool on the battlefield. These are nice, but they wobble just a bit unless you flatten the bottom. I had to put a little draft on the mold and it made the bottom a bit . I am going to put them in the store and see if anyone wants them. I was going to add stickers, but the cost would have been a lot higher and it is easy enough to create a warning sign of anything you want, like this one inspired by Red Dwarf.    Now for the tanks. With the new die I am very confident I will not have part sticking issues. Next week is going to be busy.
Posted by Ken Krout at 6:14 PM 1 comment: 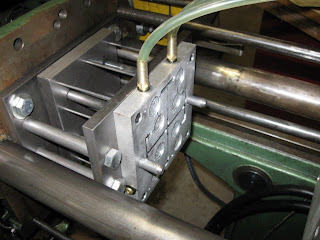 Here is a pic of a home made ejector die assembly. It is composed of 2 steel plates held apart by 4 rods and 4 tubes, each 4" long. The tubes have bolts that pass through to hold the 2 halves together, while the center 4 rods double a slide for the ejectors. The small central steel plate has 14 small rods welded to it, each 1/8" in diameter. An aluminum plate with matching holes drilled is bolted to this assembly with counter sunk hex head screws. The hoses allow cooling fluid to pass through the aluminum. I know it looks very primitive, but hey it works! And it was pretty cheap to make. It also allows me to quickly swap out plates and change products. Just thought I would show a picture of  how primitive things can be for those guys out there plotting to do this at home. Yesterday I replaced the tubes with heavier cast iron gas pipe sections because it looked like they were starting to buckle a bit under the pressure.
Still working on more molds, it is a slow process. I broke another bit and have to re-run the guns for the roller tank. The trencher might have to be re-done, which I am reluctant to do. The parts do not fit without a bit of work and my attempts at increasing the tolerances have thus far failed. I might make some to sell on e-bay with a disclaimer that minor filing is required.
I also spent some time talking with a 3D modeler who is going to help design products. I am very anxious to see what he can do.
Posted by Ken Krout at 6:44 AM No comments: