Just wanted to post that I am off to Fall-In. I am going as a guest of Highlander Studios, who has graciously offered to share his merchants spot with me. I am taking my bases and things to sell, as well as the remaining tanks. The trencher and roller are off the store now too, as I might run out this weekend at the show. I really like working on tanks and have plans to make a bunch of better models. Unfortunately the demand for the current batch has been quite low. I have to focus 100% on making organic models and generic multi-use terrain with a broader appeal, as well as extremely nice plastic vehicles.
I am hoping to run into a wealthy investor who agrees to fund my operation as a tax write-off.  Well, I am guessing that is extremely unlikely although possible.  Actually a wealthy investor would not be wealthy if he invested in unproven manufacturing techniques........so that settles that.
Right now things are going pretty good in a lot of ways. The CAD design problems that had been a thorn in my side for so long are gone and it is simply a matter of executing. Fall-in is going to be my first show, but my hope is to make the next one with model figures!


Well, that is it for now. I will post anything neat that happens at the show and pics of Joe's house when they are done.  Right now I am planning on cutting that starting on Monday.

If you are at the show stop by and say hi.
Posted by Ken Krout at 6:11 PM No comments: 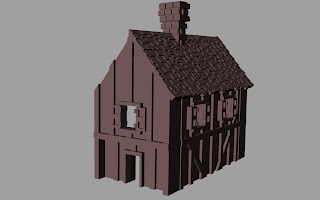 Just a few CAD pics this week. Here is the house I tried to make to look like the pic sent by Lucky Joe. The sprue layout looks like I can make one of the roof , long and short wall sections. Put 2 in a bag and you can build this little house. Would be nice to have a bigger plastic machine, but I got to make do with what I got. I will add some texture to it to look like stucco and some wood grain to the beams.  Not sure if I should make a door or just leave a hole.  The shutter look sort of plain, but I guess they would be in a semi-primitive setting.  This sprue might be harder to combine into bigger structures, but model makers can do amazing things. Going to cut this out while I am working on the design of the infantry models. 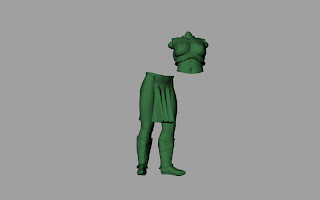 And I got plenty of time, this is taking way too long to create. So far I have the first body with arms and a head and this second body parts done.  Going to arm them with spear or hand weapons, and add shields if possible.
And finally, about the tanks. As readers of this blog know it has been a learning year, and some of the tank molds can really do for an improvement. They are by far the hardest thing to run due to the thickness of the parts and the alignment problems that plague them. With the new alignment pins I am using and some thinner designs in mind I think I can make a much better product.  In the future I would like to see a design it yourself kit that would allow for multiple weapon options. However, there seems to be little demand for them.  That is why I am going to re-focus on making the infantry sprues.
The trouble with the infantry sprues seems to be the 3-4 week design time needed, followed by another couple of weeks of milling.  I have to learn to be patient. Designing a complex sprue like this is similar to painting an entire army of minis. You seem to think it will never be done, and then one day you look down on the table and there they are.
And speaking of painted armies,  had a chance to fill the table with lead and played a game of Fantasy Rules!  2nd edition.  Very good rules set and reminded me of why we enjoy the hobby so much.

Have a nice weekend folks.

Products going away for a bit.

Just a quick note- some of the tanks are going to be unavailable for a while. I will remove them as stock runs out. The reason for this is that these early learning curve molds are really tricky to run and are going to be replaced with newer designs. (alignment pins were too sloppy and require a ton of work to get crisp parts) I was trying to run some Stalker tanks today and they were determined to be a pain. It just seems to make more sense to re-do the mold and make a better tank destroyer and make life easier. The mobile artillery mold works a lot better with less sticking.  So, right now the tank destroyers are going to be offline. Once the Trenchers and Rollers run out I will be removing them too. After seeing how smooth the artillery works it is tough to go back to the earlier primitive molds. I guess I am getting spoiled, or just having a lower tolerance for stress.
It is also exciting to plan on how to make things better and have a newer and better tank available. 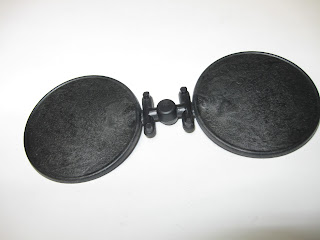 Not much to really shout about the past few weeks. Still battling this annoying PC and working on a couple of molds that turned out pretty tricky.  This is a 60mm round base that was suggested by someone, so I made it. 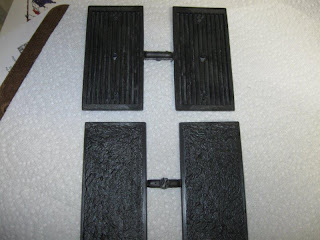 And this is a chariot base made after being suggested by someone else. Both are in the store. Lucky Joe, if you got a pic of the building type you are looking for please forward it to me. Not really sure what you want but I am open to anything. I really want to make a ship too.....
I am trying to make this too, based on a suggestion from someone. 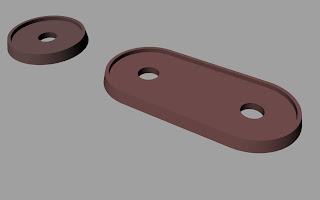 The first 2 came off pretty smoothly, but the last one has been the cause of some harsh language.  It seems the tiny lip around the edge has some amazing adhesive properties that cause the bases to not release.  Still pondering this one, but it might require a radical approach. This base has holes for magnets in it, which is a good idea.
Here is a pic of the custom sprue I am working on. The first half is done and the second half is on the mill. It is a slow one due to all the details. I designed it as best as I could on the customer's descriptions. It will not be for sale by me, as all rights go to the customer wanting it made. 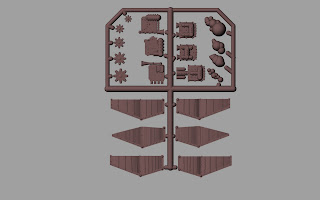 After this I have another go at that organic mold. I am a bit unsure what to do with it- 4 very similar models per sprue, or 4 very different models per sprue.
Most likely I will make similar models and throw in a flag or something. As you can tell I have been watching the old Hercules series on Netflix. This comprises my research into authentic Greek female warrior attire.  It is surprising how often Hercules is beset by foes dressed similar to the ones pictured. 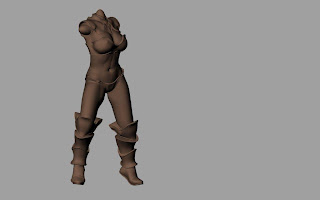 This bit is patched up and ready and I am working on the arms and hands. I posted a pic on Dakka and those folks were quite nice. I am finding a lot of people are friendly in our little hobby. Much more so than people on political talk message boards.
And that's about it for this week. Have a nice weekend and keep those ideas coming.
Posted by Ken Krout at 4:41 PM 2 comments: