"They didn't say you couldn't."

By now summer is in full swing and times are great for enjoying it all.

Lots of odds and ends to report, as well as some comments found online by some smart people. Which will eventually lead back to the title.

First some pictures showing that persistence eventually finds a way of making things work out. Perfection is always elusive, but good enough is not a bad consolation prize. What follows is the worlds rarest slot car. There is only one as far as I know on the planet.

First test- not so good. 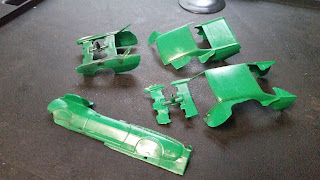 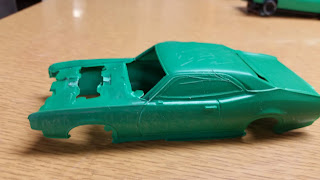 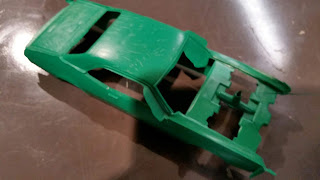 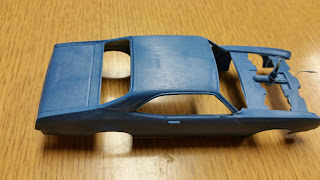 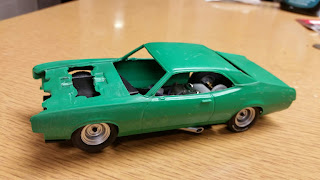 And getting to be acceptable. 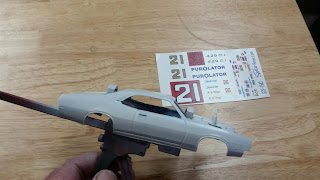 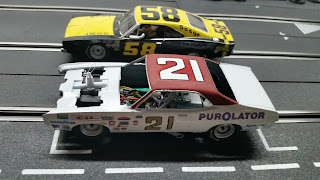 This car took more effort than painting a real one. Along the way there were casualties. 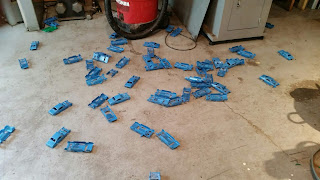 I begin designing the hood and bumpers in the morning.
So that is good news. I am curious to see how the tiny slot car market -with limited companies supporting it-  compares to the GIGANTIC gaming market with hundreds of vendors.
But the gaming market is not going to be neglected for much longer. Some circumstances have forced my hand, and I am going to pay the cost to get my figures sculpted.
My thoughts on this are to fund the first batch of sculpting myself, make those models to prove the concept. Then go to kick starter to pay for the rest of the sculpting for the entire bloody army.
So there is that.
Stop reading now if you have blood pressure problems..............................................
Now, why the sudden activity? Well there is a book out called "Who Moved My Cheese". Companies make employees watch it about the time they are getting down sized. And simply put, times are changing.
"They did not say you couldn't".
That saying comes from Smokey Yunick, a renowned race car builder from the 60's who literally bent every rule imaginable to win.
I related previously about playing a game of WFB in which my opponent deployed his canon in the water. While the rules forbid MOVING in to the water they did not specifically forbid deploying in water. So we played a game with a canon floating like a cork firing away with sopping wet gun powder.
So how does this relate to the act of running a mail order business?
In 2010 the US entered in to an agreement to foster greater economic opportunity for developing countries around the world. The idea was someone weaving baskets in the rain forest would be able to sell online and get preferred shipping rates. These are really good rates. A 4.4 pound package costs around $6 to ship globally. In comparison my international shipping has gotten to the point that an order of 2 packs of bases costs $22.50 to ship. International sales have vanished.
"They did not say you couldn't".
Well, among the places that signed up as "emerging" economies are Hong Kong and China. The result has been more and more sellers on Ebay and Amazon offering direct shipments to buyers with free shipping or extremely low cost shipping.  The USPS is required by treaty to deliver the packages and eat any loss. Except they can not keep losing money so they have to raise rates on domestic shippers. It does not take a PHD to see where this is heading.
"They did not say you couldn't".
And it is even more interesting.  Smaller items frequently weight much less than 4.4 pounds. SO they are compiled in to bundles and shipped. Once they reach the US that bundle is torn open and poured in to the USPS system. And if you look at an average package of a single base weighing 3 ounces, a 4.4 pound package could contain 20 or more of those smaller packages.
So imagine 20 of my packages shipped in one of these small bundles for $6, or me shipping 20 packages domestically at $3.50 each. The difference is a lot. I may get some discounts depending on my feedback and seller rating-but the standard starting rate is $3.50 and they are paying $.30.
"They did not say you couldn't".
So I spent  a lot of time trying to figure out how people are coping with this. For a lot of E-bay sellers there is no solution. Just go out of business. They were doomed. Others are trying to make unique items. However, there are several stories about people simply having their products copied and sold alongside of the US based seller. For much less with free shipping.
"They didn't say you couldn't."
So here is a solution that seems to work, from another online seller.
"As an online merchant here in North America I have to send my inventory to a warehouse in China just to send it back the US. Costs me $15 which excludes labor to pick, pack, package and label to send the same packet down my street and only less than a $1 to have them pick, pack, package and label and ship from China. This basically means e-commerce in North America is as good as dead ! They also have compiled shipping which an alien concept for online merchants here in North America. Let say if you buy something on eBay or Amazon that weighs less than 1LBS, but you are still being charged the flat rate for 2.2lbs as you pay individual shipping to individual sellers which carriers like DHL, Fedex and UPS benefit. Not so in China they have warehouses and services that let you compiled all your purchases from different sellers until it reaches 2.2lbs before you authorize them to ship ...this is an awesome advantage that they have ! I am sure that the item you bought from eBay is from one of these service warehouses"
So an American company is shipping stuff around the word twice just to take advantage of this E-packet treaty. You know something is wrong when you have to go to such lengths to deal with a government policy.
The point is China is going to take over the market for generic items like bases. Accept it and adapt. Consumers love it, as I have for years been buying cheap stuff on E-bay with free shipping. It is not going away and is not going to change.
Proxie Models has to change. So look for some new directions and some new focus on getting products out the door. It is good to have a reason to get moving.
Anyhow, look for some more news as it comes available.
Thanks to everyone who reads this and supports my efforts. It continues to be a grand adventure filled with learning and making really neat things.
Have a great summer!
resources below for more information.
resource 1 you tube
resource 2 you tube
resource 3 article
﻿
Posted by Ken Krout at 8:20 PM 1 comment: