Hello again, here is a brief update on what I have been doing lately. 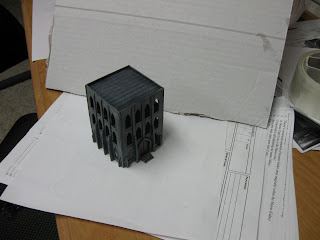 Here is a pic of the gothic building painted up with a quick drybrush. It measures 2.25" square across the top so it is smaller than the other ruins. It can be combined with a second kit to make it larger. I glued in some card stock for floors. I was thinking of doing a floor mold but without any floors it makes it easier to build a bigger version and add some sheet styrene or cardboard. I got a fair bit of polishing to do on this one, but it should be available in a day or so.  The butresses want to stick in the mold so I have to take small polishing stones and smooth it out. That is a pain but it seems to be a requirement if you want the parts to come out. 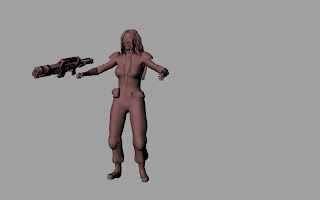 Here is a pic of the new sci fi womans militia. There are some fundamental changes. The weapon is not in the hands. It must be attached but this will allow me to include a flamethrower and sniper rifle. I added a belt which I plan to seperate the torso at. This can make the model more multi-pose. The arms are a generic semi-bent. I am going to take them off at the shoulder. The head will most likely have to stay with the torso due to the hair hanging down. I hope to create a sprue that will allow a variety of builds.
But I need a LOT more practice getting parts to fit together nice. So, I am going to make this guy-or somewhat like him first. 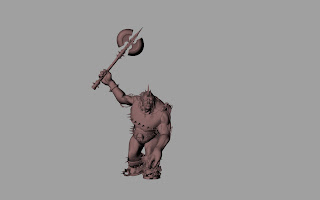 I am cutting it out now. I removed the boots and helmet and made him a bit more plain, but it will give me a chance to see how a 5 part model fits together. This troll will have the usual torso, legs, right and left arms, and head assembly that is my ultmate goal. I left his 2 fingered hands open and gave him a choice of 2 primitive weapons.   After looking at the sci fi women I was working on I realized that I still have a lot of work to do before I am able to make the versatile multi part molds I want to make, so this guy is a baby step in that direction.
So that is about it for now. I hope to have the building out by the weekend, the troll if it turns out, then on to those canon fodder militia. After that, I got to see what looks interesting.