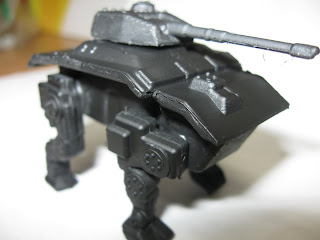 Just wanted to post a pic of something I was working on. A walking recon tank. This is one of the first out of the press and the only real issue is that the front leg posts do not fit into the slots properly. Still need to do a bit of polish work on the mold and not really sure how to get the front legs to go on straight instead of wobbly looking. If I figure it out I will put them in the store.
Thanks for the feedback on the building, I am cutting on it now. I am going to leave it unscathed and put some small ledges on the back to attach plasticard to.
The recon tank has a complex parting line that travels along the fender, a bit tougher than the flat stuff I was making. After the fitting problems I decided to postpone the female figs for another few weeks. I am currently designing a multi-part armored troll. This will be one fig per sprue with a few options. It will give more practice on the parting line and help me to get better at making parts fit together. I hope to start cutting it as soon as the new building is done.
I do have another nagging idea on the back of my head. My kids got me addicted to watching a Nickelodeon cartoon called Avatar the Last Airbender. There were some pretty cool tanks used by the bad guys in the show.  I kind of want to make some like them.
I did have ANOTHER breakdown this week which had me quite dismayed. CNC power switch did nothing when I turned it on. Seems the PC power supply had gotten fried. Took me a while to sort it out, luckily I had an old one lying about.  Still-the gremlins in the shop have got to go.
That's the news for this week. I will post more when something interesting pops out of the machine.
Posted by Ken Krout at 4:52 PM