The problem with blow up objects

OK, more nonsense from the asylum.
It has become some what a of a windmill for sure, but I am going to try another organic. The issue with "plumpness" Has been somewhat resolved. If he were alive Frazetta would take one look at this girl's butt and say it was overdone. And if that gun were real it would weigh more than a Mopar 4 speed. And I mean the old ones that even a hemi could not break.﻿ 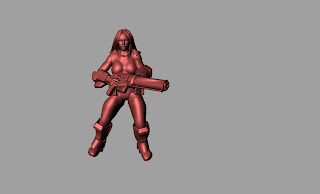 And that creates a bit of a physics problem. Namely 2 objects can not occupy the same space. I was playing around with a rifle and it sorts of tucks in the pit of your arm and is somewhat hidden.  This would not be possible if I was made of plastic and the gun was 5 times larger. So it is going to be tough to make something plausible. It could simply be explained that it is sci-fi. But it would be nice if it was slightly convincing.

That leaves me with a few options.

1. Mold the gun INTO the arms and torso, losing the multi pose.
2. Keep it multi pose and just have an awkard stance constantly.
3. Make everyone standing around like this. 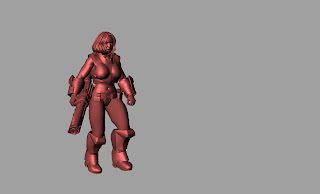 It seems there are a lot of compromises along the way.

Will keep you posted, but some sort of big ass female with a big ass gun is going to fall out of that press in a couple of weeks. Not sure if it will be a pile of crap or not.

Keeping my fingers crossed on this one.