Well hello again folks and welcome to another collection of random nonsense. Things have been busy as usual, with more or less going on depending on my energy level.

I have been working on some larger scale models. At work we are building 1/1 scale modern or sci-fi terrain. 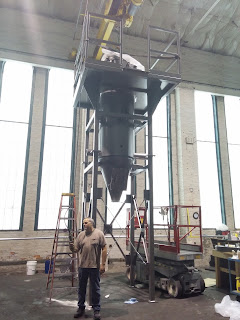 Once you get used to all the climbing about it is not too bad. 1/4" steel does require something a bit stronger than Zap a Gap.  This particular piece goes on top of a 60' silo, and the crane to lift it rents for about $2000 per hour.  I can't wait to retire..................
In the work shop I finished the Magic tokens. It gave me a chance to play around with color changes. I kind of like making things in colors. It seems like another step in the right direction.  The bad part is you end up with a pile of Technicolor trash as the new color slowly pushes out the old in a swirling mess. 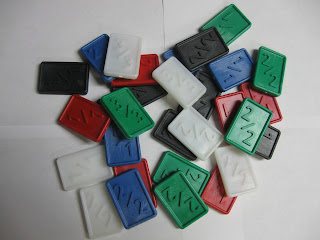 Next up is going to be a couple of egg shaped bases to folks rebasing their cavalry and chariot to Age of Sigmar.  Progress will be slow.  I am really behind on even keeping up with stuff already made, and I would love to just make a batch of everything. The limiting factor is time. At least for the near future.
I ran across a flier for a local convention filled with old stars- famous people
One of the first folks on the list is Lee Majors. As a kid Lee Majors was pretty much the top of the food chain as far as Hollywood stars. First off he was bionic, he fought against a freaking Sasquatch, and his wife was the hottest starlet on TV. It is kind of cool to see him still out there meeting fans.
Which brings me to another project in the pipeline- 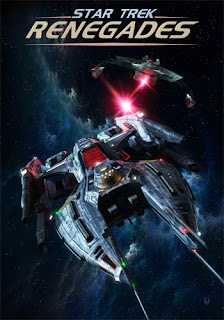 Let's just say I am as excited as a very excitable person who has something really exciting to get excited about.
I look at it as a small step towards a Lee Majors lifestyle. OK, a very small step. Just slightly closer to maybe e-mail communicating with someone who actually may have been in the same office with someone who was potentially in contact with an extra on an online fan based series.
As more things come out I will keep you posted.
Have a great fall everyone.  The meteors were great last month and the best time of year is right around the corner.
﻿
Posted by Ken Krout at 8:15 PM