The Future is Getting Closer

Well, been super busy of late but still plugging away. 2 jobs is a bit of a blessing and a curse. Little free time but some extra cash.

Sales are keeping me hopping. I am trying to keep everything available and usually succeeding with at least the popular stuff. I have a couple new molds done, some 32mm round bases and working on some tokens. My kids started playing MTG again and I realized I needed some tokens so I made some.  I will put them in the store when I can. Sorry about the female sci-fi figures. I have simply not had the time to finish the other half of the mold. But I will someday.

Also planning an oval cav base. Because a lot of people are going to be re-basing. More on that later.....

Later this fall the new laser cutter will be here. It is a monster and features dual cutters and a 4' X 8' working size. A friend also picked up a sinker EDM machine. Once things get sorted that tool will be in the arsenal as well.

I have been active in the maker movement.  This is pretty nice and even though I am still working on my projects solo the collaboration is allowing people to share tools.

The point of all of this is that in about 2 years I plan on leaving my outside job and retiring to tinker in my shop full time. With access to 2 CNC machines, an injection molder, a 3D printer, a giant laser, welder, torch, and an EDM machine.  Unfortunately I can never hire any employees, as per the dictates of my local government overlords. I am allowed to have a "no impact" home based business. If they catch me with employees they may throw me to the sharks- meaning changing my tax status and the inevitable bloodbath and the hands of the school tax board.

So, be patient. Right now I am simply happy making what I can. This week sees me shipping almost 200 packs of bases. So for the record I am announcing that I have beaten the system.  Thanks to everyone who helped make it happen and if there is any way I can help others via the maker movement I intend to.

In local environmental news, deer have eaten my entire grape harvest, and muskrats have dug holes in my stream and drained my pond. I wish those snakes would come back and eat them, but alas I think they have all perished at the hands of my marksmanship. I promise not to kill them ( any more)  if they just come back and eat those stupid rats.


Which brings me to the future. I need to think long term and try to look at trends and predict what would be popular in the 2 years from now when I have time.

So I have been slowly digesting this whole "Sigmar" incident. My reactions were pretty typical, from the initial projectile vomiting to the eventual waking up in a fetal position miles from home with no knowledge of how I got there.

Overall the ambition is quite brave. Not a lot of companies would make such sweeping changes. Some of the concepts are simply revolutionary. Just throw down and have fun. The company simply declared all out war on the tournament scene. I have to agree to some extent as I have seen what people can do to twist logic in order to win. Maybe they got tired of being beaten up on forums by players demanding they balance their game. Maybe they are just saying-" Balance this!" and throwing up the 2 fingers.

It does really put the game in the hands of the player, and that finally made me come to grips with the ideas and think that what they did was remarkable. It is totally up to you how and what to play. I actually might like it. Even though on the surface it sounds utterly horrible. I mean really, really dreadful.  I am buying Kings of War, just in case my initial reaction was correct.

Let's take a moment and look at the future and see what it will be like if this trend continues........... 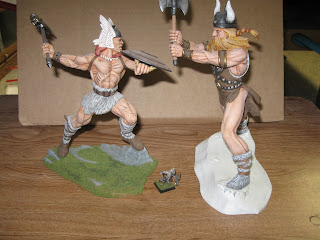 This picture is of a possible game of 10th edition. Scale creep is a little more noticeable as you can see from the older mini placed in between the battling Norsicanauts.  (A new faction for this edition). Army sizes are smaller, coming in at 1 figure per side. The guy on the left is a Skull Blood Laceration, and the fighter on the right is a Scabby Blood Skull Smash Face Stab-master Arson. And in an industry first products will come with financing options similar to other premium products like Ferrari. You will have to insure your army until it is paid off.

( If you want to find the most inventive names, I once again refer you to those witty girls of women's roller derby- http://www.twoevils.org/rollergirls/)

The current standard is 4 pages of rules and 600 pages of exceptions and special rules. (Sounds like a bill from congress in a way).  In the future even this will be more streamlined. There will be only one rule of 10th edition, and that is there are no rules.  None.

However, special rules will be much more plentiful. As in there will be an infinite number of them. Players will be allowed to shout at any time during the game and create a special rule in the moment. Simply by saying the words "special rule" before stating the new rule.  As such the game will be a lot more fun and laughs and no 2 games will ever play the same.  In the end the players will create a story that will be a lot of laughs. If the current version is a "beer and pretzels" game the next version will be a lot more fun when other states have adopted Colorado style drug laws.

So that is a glimpse of the future. More of us guys flying under the radar and keeping our heads above water any way we can.

Have a great weekend and keep trying to beat the system.