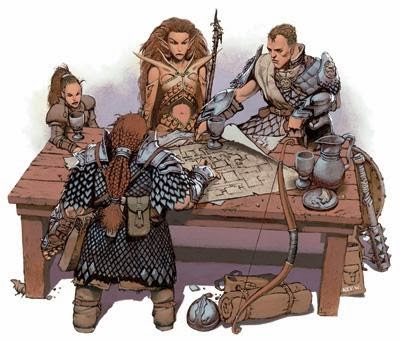 Good day folks.  I often get comments on my lack of business knowledge.  ( ok, comments is a bit of an understatement. Long and definitive e-mails with a power point presentation of my errors might be  a better description)   Today I want to assure readers and fellow entrepreneurs that all the skills you ever need to make your dreams come true can be gained around a kitchen table with some odd shaped dice. The parallels are too many to list but I will guide you through a few of them.

First off, it helps to have a party. Each member of which should have a different skill set so they can compliment each other.  This is very important. A party of 5 fighters and no thief will be thwarted by the first locked door they are unable to bash open, or poisoned by the first trap. Try going through a dungeon with no healer, or reading s scroll with no wizard.
A game company should not have 98 playtesters and no rules writer for example.

An alternative is for one person to attempt to do everything and be a multi class character. This creates very slow level advancement as ones experience points get spread around to way too many skills. This can work sometimes, but you wind up with a 105 year old character who is a 4th level- fighter/thief/wizard/cleric/bard/etc. etc. etc.  By the time this character gets to any meaningful level he is suffering from advanced age and dies.

If you lack a party and your character has sufficient charisma you can get followers. These chaps go along for the ride with the vague promise of future riches and can be useful. It works best if they get eaten by a troll after they have safely helped you cross the treacherous swamplands.  That way your character gets free assistance and those losers are out of the way before the treasure.  In other words, their wife forces them to get a real job at some point in your project while you get to still be aided by all the free work they did. Not naming any names, but this may have occurred in the past to some people I have met via e-mail who worked with a company that they have since parted ways with.

The types of people in your business are like D and D character. The "tank" fighter in heavy armor who takes all the blows is the financial backer who funds the operation.  He winds up a bloody and battered mess even if the quests succeeds. The thief would be the web master, who figures out all the intricate tricks to getting good exposure online.  The assassin is the guy who covertly trolls forums stalking the right place to strike with a link.  While the bard is the non-stop talker who is great to send to conventions to amuse the customers.  You get the idea. The principles of lean manufacturing require a company to examine its process and eliminate any step that does not add value to the end customer. I try to do this and trim things down to keep the operation very lean. If it is not adding something of value to the CUSTOMER, it has to go.  For gaming, take only the characters needed for the task. In the above case, if the party is starving in the wilderness the bard gets eaten first.

It is important that the party members have a similar alignment. Nothing worse than being a Paladin and finding out the party tortured some nuns while you were not looking in order to find the location of the offerings so they could steal it.  Likewise, it sucks to wake up and realize you have been sold to Drow slavers and are destined for eunuch duty in the harems of some sultan, while the other party members go through you back pack. Be vigilant for alignment shifts during the game. The party sometimes thinks they can get away with eating the children of the local farmers, but the DM is watching. When the entire party gets burned at the stake by an angry mob they have no one to blame but themselves. One well known game company has fallen in to the worship of share holders, and the resultant corruption has left a trail of angry and bitter customers. A once proud and mighty deliverer of fun and joy to the world turned in to a hated corporate profit machine. The hobbyists have been gathering kindling for some time......................

Once you have a party, you need a quest. Visiting the local inn for rumors usually works, but beware of false rumors. Not all treasure is created equal.  Some promises vanish in the light of day and many dungeons are just too dangerous to mount a profitable expedition.  Along the way you will see the corpses of those who went before you broken and littering the grounds. Some of these can be re-animated and help out with clues as to what killed them so you can avoid a similar fate.  Of course every true adventurer knows that regardless of the number of bodies outside the den, you just have to charge in swinging.  You must have a delusional sense of self confidence to attempt it. And if you picked up a doppleganger in the inn it is really going to suck when he sticks a spear in your spleen at the most inopportune time. Not sure if ANY time is good for having a spear rammed in your spleen, but you get the point.   The forum is the equivalent of the inn in fantasy role playing.  Forums are filled with a bewildering assortment of people of all types. Some should be avoided, ( no- really avoided)  Hidden amongst all the crap are a few gems. Finding a few good contacts on forums is a huge help. Of course we all no how misleading the internet can be. I have tried help people along the way, and will still do what I can. I am helping someone do a kick starter in March, and will always do what I can to help other dreamers along. As long as they do not have a dream of killing me................

This guy believes in his dream-  Guy with confidence

And finally- know your level.  This is vey important. If all of your party members are 1st level, it really does not matter HOW much loot that ancient red dragon has in its lair. You are going to be burned to a crisp and eaten. The death of the whole party is a certainty. Why not smack around that hobbit baker in town and shake the change out of his pockets to test yourself?  Then you can move on to something bigger and better, maybe  ambushing an orc fisherman for his bait, charming a gnome to lower his prices on iron rations,  pillaging that kobold refugee camp where the survivors gathered after being displaced by goblins,  and finally getting a vampire so angry he pursues you in to the sunlight and dies. Currently I am a second level plastic maker, but first level at everything else regarding running a business.  If I make functional infantry I will be celebrating 3rd level! Getting a better web site would make me second level in that too.

So there it is, forget business school and just play a FRP game. You need the right bunch and a lot of nerve.

As for getting things done.......well I shoveled snow yesterday, ice comes tonight, and then a lot of snow later in the week.  Come spring, things are going to be a lot more interesting.