Hello everyone. Wow, fall came very quickly.   Best time of the year by far, and life is going by in a peaceful kind of mellow existence.

Ok, now for some update on business and hobby news.

The latest episode in "What else can go wrong" is the fact it was a very wet summer with extraordinary rains. The storms were many and fierce as they say. My basement office and hobby area was flooded. But the worst was not from the walls, it came from the well. At some point in the past wells were placed in basements, which seems like a smart idea because the pipes will not freeze. But if the well overflows, it has no where to go.

I made the situations infinitely worse, which I am too ashamed to provide details for. Suffice to say I took a minor issue, and with great expense and sweat pouring labor, turned it in to an unmitigated disaster. 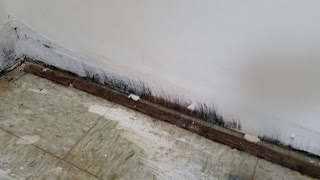 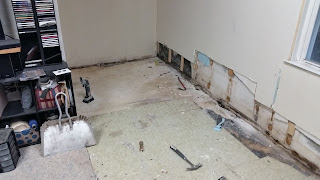 So you can notice the bottom foot of the wall had to be removed. Mold grew quickly and the entire area had to be cut out, carpets removed, and everything new painted with mold proof paint and drylok in the event future leaks occur. 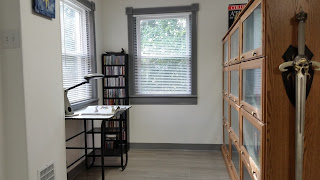 After a month or so everything is better, the well is sealed and I have vinyl flooring with rubber cove base trim.  This gave me an excuse to go through the piles of junk and some of it is going on E-bay. I have more things to do than years to do it in.............  Overall the basement needed this and the end result is a hobby/office area that is cleaner, better laid out, and much more organized. Within a month it will be a mess but for now it is very nice.
The car mold is progressing nicely and it has been great fun painting my own car. It sort of feels neat having the only one on the planet.  Here is a recreation of the Pop-Kola car raced by Benny Parsons. For some odd reason I am now a racing fan as a result of my interest in slot car racing. Cars have always been a part of my life, from working in a junk yard at 16 onward. But racing has been sort of boring and not of interest.  Not lately.  The only sport I tend to watch anymore is Nascar.  People laugh and poke fun, but there is a lot of strategy going on behind the scenes once you get to understanding it.﻿ 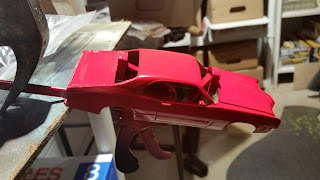 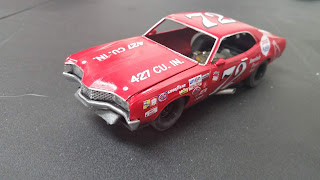 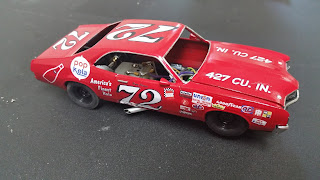 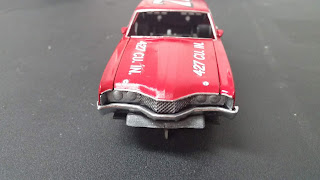 Working on more today, and expect more pictures as I finish them up. The street car is going to be epic.  I have been trying to find a good place to have decals printed. After looking on Craigslist for months and answering repeated ads for free lance graphic designer I gave up and learned how to do it myself. The best place on earth to get decals printed is Cartograf in Italy, but prices are $4-5 per sheet with a minimum of 300 sheets.  What I want is some prototypes to play around with. I purchased the decals above from Patto's Place in Australia.  My printer does not print white ink which limits what I can do. I am awaiting some white and clear decal paper in the mail to print out some of my designs. 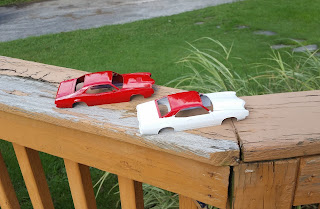 This has been a real undertaking and no sane person should ever put this much effort in to having a slot car model.  Remember, the first plan was to build my own Warhammer army, and that is not over yet......

This week has been one of running parts. The basement has taken a lot of time and inventory is depleted. My goal is to not stop until everything possible is back in stock.  The parts below were designed by Elliot to compliment his Heroclix walls. This mold is utter crap because the parts stick to the wrong side. Each sprue has to be pried out manually but it eventually became obvious it was time to just break down and do it or throw the mold away.  The previous product is gone and replaced by a new one with a mix of old and new parts. 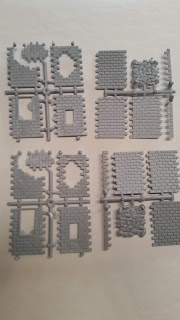 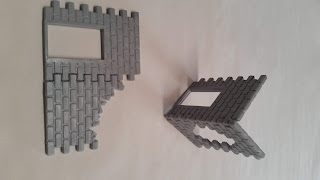 While Elliot envisioned these as a game accessory for super heroes to smash and move around on, a customer sent me these pics and he made some nice 28mm terrain for any tabletop wargame.﻿ 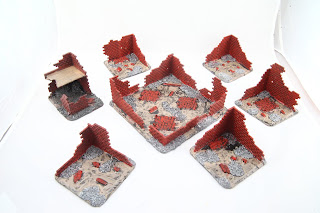 I always enjoy getting emails from people and seeing what they are doing with things. I was looking at a battle report from Historicon and the pics had a bunch of my buildings in it.  Nice. I once actually got an email from a self described fan- imagine that!
Ok, so back to that Warhammer army.  The unresolvable problem is the concept of heroic scale. But eventually that has to be sorted.  I have contacted someone to do some sculpts for my jungle themed primitive warriors. Why this army was dropped from 2nd edition WFB is a mystery.  So these are his designs and after the car is sorted (still need windshield, interior, and driver molds) some sort of mini figures are going to be tackled once again.  Most likely I have some more tests to do before these are in the breach.  I am going to try to make something like some more infantry for 40K before I tackle this entire army.  The procedure is-   try, fail, learn, repeat. 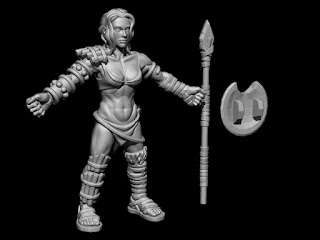 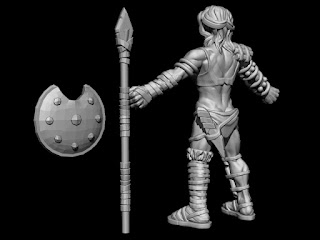 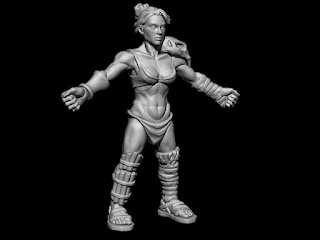 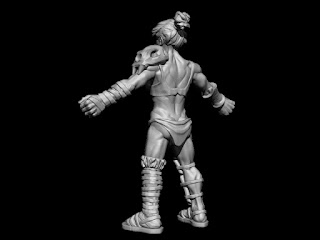 So as the year winds down and the shop gets visitors of all sorts. This deer seemed oblivious to the machines running inside. And there is a toad in here that has been pushed out the door numerous times but keeps coming back to hop across the floor at odd times to cause alarm. Assuming he eats bugs or something else to earn his keep. 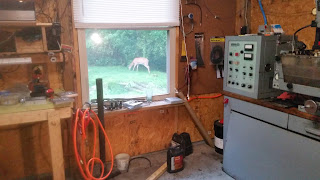 One last thing I would like to share is a link to something a few local guys are doing.
Little Wars TV
Years ago I used to game with these guys a little, when I was doing more historicals. These guys are rules writers and publishers, as well as gamers.  It has been at least 10 years since I gamed with them or even talked to many of them but I have enjoyed watching their videos and rules reviews.  They actually have a building strictly to conduct their hobby and seem a decent bunch. It has been so long for me that I have never met many of them.  They really do make historicals look great.
Ok, have a great fall and enjoy the best time of year.
﻿
﻿
﻿
Posted by Ken Krout at 9:23 AM