Well here is the latest news.

Been working on standardizing things across the entire work flow. I am just too darn slow and have to take shortcuts wherever possible.  This means getting things that work and then sticking with what works. I have decided to make both CNC machines more compatible. They both run MACH 3 software but the drivers and settings are all different. 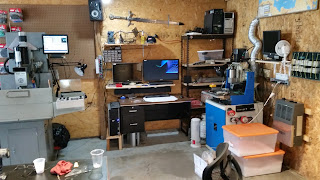 Here is the newly organized workstation, with new Craigslist desk and wall mounted monitors. Note the sound bar beneath the shelf and sub at my feet. There are a LOT of speakers around the shop to blast music out. I recently discovered Scandinavian metal and so have the neighbors!  Novakon on the left, design station and PC gaming platform in the center, and ACT machine on the right.

Products are better organized thanks to some filing cabinets modified. 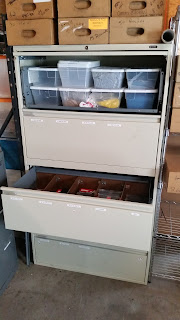 The top contains various colorants. Previously things were stored in cardboard boxes originally used for Harley shifters. One perk of working there is I got hundreds of these really great boxes.
The large Novakon- (curse this P.O.S.!!)  is actually doing OK.  The issue is it requires a 32 bit operating system and an older style printer cable.  I went as far as to caulk up the leaks, install a working E-stop button and limit switches, and a nifty light. It is going to get an automatic tool zero in the very near future.  how to   I purchased a government surplus Windows 7 PC with 32 bit operating system and install the MACH 3 software on it. So I have a complete back up system for both CNC machines in the even either computer fails. Both currently run Windows XP. I plan to keep going as long as possible on this antiquated system. As long as everything can keep working reasonably well it saves a lot of money.

So in order to make things bulletproof, I want to make the ACT machine more reliable and standardized.  The standardized figure holding fixture has been made again. This time it looks very likely to work. 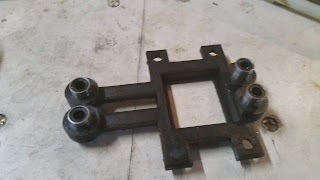 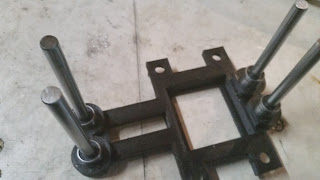 The graphite block is held in the open rectangle and there are linear bearings with 8mm rods to allow the EDM machine to burn the image in to metal with out the binding up and face breaking that happened before. The action is smooth and effortless.

So I need now to be able to make the electrodes without any more delays or crap breaking. This requires the ACT machine to run without a hitch. In order to iron out the wrinkles. Before starting I had to take an honest look at the machine. It was a hopeless nightmare of patches. The limit switched and E-stop did not work. (Safety? we can bypass that!) The spindle was controlled via the circuit breaker box on the other side of the shop, and so was the dust collector. 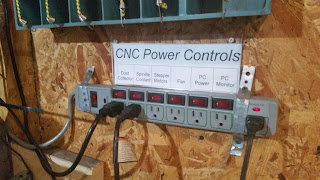 This is much nicer. 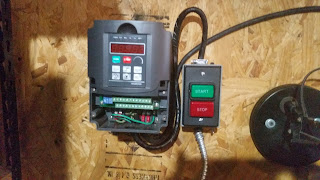 And here is more new wiring. Sometimes it is worth it to take some time and do things right. This is the VFD for the ACT machine. I was manually setting speeds but when the new system is in place the PC will control this.

Which brings us to this little contraption. 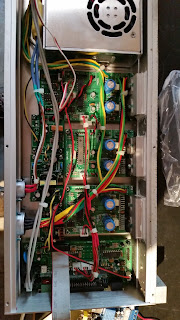 At first glance, this looks a bit confusing. But the bottom is the breakout board that interprets signals from the printer cable and turns them in to action. Go left, right, up down, etc. It also send input signals back to the computer.  E- stop, limit switch is reached, etc. This is what I needed to replace. It is going to be the same one used on the Novakon, since I have a notebook full of data on how and why things are wired. 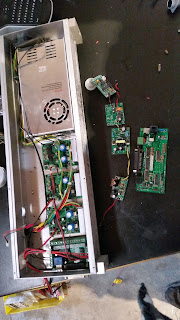 Using my tester, it seems that the 4 small boards taken out did not really do anything. I removed them, and bypassed the wiring. If they did not do anything, who needs them? So this is the new set up.
Unfortunately, it burned out as soon as I applied power. Why? Well, it seems I should have tested the tester. I frequently buy things from Harbor Freight, and you get these neat free gifts. One of them is an electrical tester. Mine had a short in the one probe. Depending on how the wire was bent coming out it made contact or not. So, it was giving me fake news. Sometimes it worked, sometimes it did not. This thing only runs on 12V DC power, so it is not life threatening. I have better testers for 110 and 220 voltage thankfully. But it is extremely important to have reliable information when configuring complex wiring systems.
Basing my decisions on this "fake news" meant the remaining components were not powered properly and died a tragic death at the hands of too much voltage. 24V instead of 12V.
So, another $70 worth of boards are on the way and a new tester is in the shop.
Some new stuff did got run. The Makerspace concept actually came to fruition. Dr. Oogan   link    made a mold and stopped by the shop to run some parts. We had some issues with color.

At one point we thought the Arburg had sprung a leak and was mixing water with the plastic. I took the entire thing apart and tested it with crack detecting penetrant. It turns out we just got a bad batch of colorant off E-bay.

In the end his traffic cones were created with the proper color.
The flying base adapter is done. 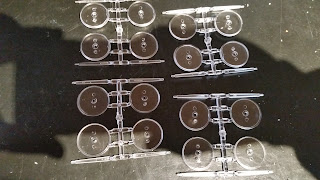 It gave some practice with clear styrene. This is a little tricky and not really sure if this one will stay as a permanent product. The plastic is brittle and cracks under stress. 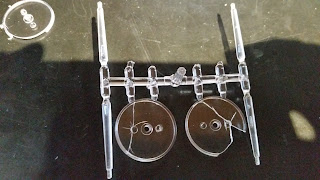 The scrap rate is unacceptable so once these are sold out it may not be re-produced.

I also finally finished the 100mm round base. 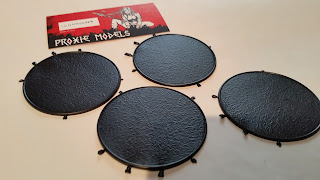 ﻿
This is the first mold specifically created to run on the new mega-die assembly. The one that allows me to vary the size of the metal blocks and offset them to allow the plastic to be injected from any point.  It was very tricky to set up for the first time. It is so large I did not plan on trying to fit chubby hands in to the tiny space required to attach it. It is just too far to reach to the middle.  In the end I welded extensions to the end of a couple of wrenches and it worked great.

This success had been really a crucial stepping stone. At this point it really feels like this shop is capable of making anything. And that is just amazing.

Usually when you get the feeling that things are going well reality has a way of letting you know how wrong you are. 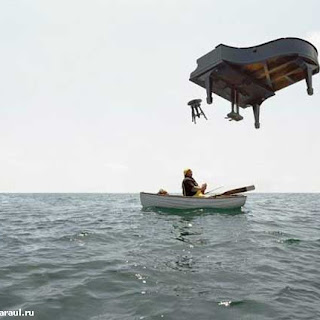 Sales are strange.  Currently it is not time to panic, but last week was the slowest week in over 3 years.

I have been on some forums with other online sellers and many are facing some challenges. Both E-bay and Amazon have been trying to get me to pay more fees in exchange for better placement on search results. Many sellers are very suspicious of wild swings in sales numbers and blame it on deliberate hiding of listings or suppression due to this new "pay MORE" scheme. Others are equally upset about the free shipping from China that has simply killed their business. We all got things we would like to see changed, but have to just deal with things as best we can.

I have listed some items on a sales platform called Bonanza based on suggestions from other sellers. I never heard of it but it seems some people are looking for a better alternative.

The one blessing of slow sales is more time to work on other things. The whole lemons and lemon aide situation.

So there is the status. I hope everyone keeps working on what ever motivates you and never give up. Be willing to help others without being used, and be grateful when someone can lend you hand.

Have a great week.