Ultimate Novakon meltdown, and other musings.

Again a fine fall day. Best time of year to me. Mostly because I no longer have to mow the lawn or clean the pool.

Last post I commented that ting were running smooth. Boy did that ever piss off the gremlins and they launched an all out assault. Literally everything is going haywire, not the least of which was the Novakon CNC. It just sputtered, and simply lost its position again. I have had it with that piece of crap so I decided to re-make it. Every time it goes off mission it ruins a piece of metal and throws away hours of work. 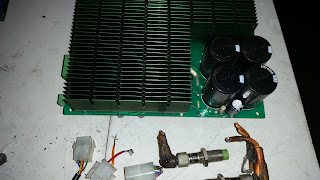 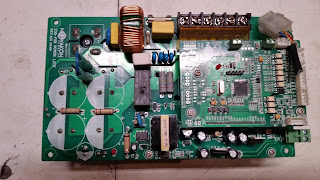 This is the VFD or variable frequency drive. It died a long time ago. These were junk from the factory and the company did not really offer much support other than to allow you to wait on hold for an eternity. The proximity sensors are also shown in the top picture. These caught on fire because no sealant was used to protect them from the coolant which flowed in and shorted them out.  So I disabled the proximity sensors and had no working limit switches for the past 5 years. 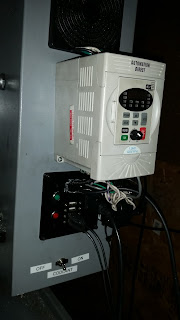 This is an aftermarket VFD added to replace the factory junk. It works OK.  You can see on here also the toggle switch to control the coolant I added to replace the factory one that went bad. For years every time I turned on the machine it would start spraying coolant until boot up was complete and I told it to stop.  The strange coil of wires is an attempt to prevent magnetic interference from corrupting the pulse of electricity. It is some type of shielding.

Also, the E-stop button has not worked for years. Not sure why since I tried everything I possibly could. So- no limit switches and no emergency stop. A limit switch is handy, but an E-stop is really nice when your sleeve gets grabbed by the spindle.

And finally to twist the knife, the machine also began for no reason to spin the spindle upon startup to go along with the unwanted coolant spray, and randomly stop spinning while also missing steps and losing its location. When I opened the access panel it sprang to life. So the CNC machine was as reliable as the juke box at Arnold's that Fonzie would punch to enjoy music. This was not going to work. 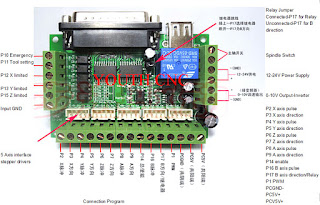 What you are seeing is pretty much the only directions that came with the device. It replaces this one that came on the machine. 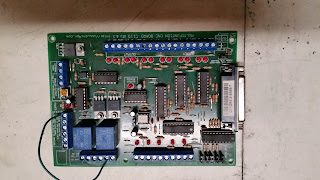 This is called a breakout board. It connects to the printer port on your PC and directs all the signals normally used to print stuff in to different sections of the CNC telling it what to do. The problem is that EACH pin has to be carefully programmed or the results are disastrous.
I will be in therapy at some point for what followed, but somehow it seems to be working. Along the way the proximity switches were replaced and now work and the E-stop is working just fine. Two tubes of caulking should keep things dry and stop that expensive leak.  (coolant is $200 a bucket and watching it pool up on the floor is enough to make a grown man weep)  Going to return to milling and see how it does. Preliminary tests all seem to be a go. I can control the spindle off and on as well as RPM from this new board. This is done using PWM. This stands for pulse width modulation or some technical crap and it really is as screwy as it sounds. I input an incorrect setting and spun the motor so fast the cooling fan on the top exploded as the plastic fins could not withstand the force and were torn apart. 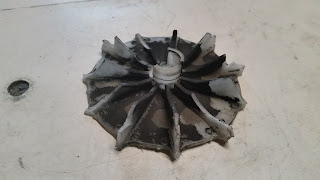 The thing about the CNC home workshop stuff seems to be that you have to become your own engineer. And everyone is super helpful on forums but each person has a Frankenstein that they pieced together and no 2 are alike.
Oh, and also the PC I design on and am typing on at this moment is having corrupted registry issues. Sometimes it forgets who I am and rejects my password. It hilariously locked me out of all my music, photos and e-mails. What a joy. Got that sorted but it might suffer a complete meltdown soon.
So as you can see the gremlins have been beating me like a baby harp seal gets beaten by a fur trader.  Thank God I have 40+ molds lined up to make parts out of because these delays are frustrating for sure.
Which brings me to something I saw today that was super inspirational-coolest man alive
Sorry about all the ads on the link. The internet is almost unusable with all the crap everywhere.
Anyhow, think about what this guy is doing. He built a home made space ship and is going in to space to de-bunk the round Earth hoax. While running for governor. Seriously, who is NOT going to vote for someone who can get things done like this man. He also spent a tiny fraction of NASA's budget to do it. He does not just reject reality, he gives it a kick in the teeth.
I got to say this has made me want to tackle even bigger challenges. This guy has the brains to build his own space ship and the balls to pilot the thing. His impending death will be a great loss.
On that uplifting note, I hope everyone has a Happy Thanksgiving.  More posts on the way soon as nothing else can possibly go wrong.  And for that I am very thankful. ﻿
﻿
﻿
﻿
Posted by Ken Krout at 5:53 PM