Well things are going Ok lately. I got some odds and ends to update.

As I disclosed previously the EDM missing word is Auto.  Is it a mere coincidence that this important word was smudged out and all the safety circuits had been bypassed? Perhaps.

I decided a suitable warning label was in order. 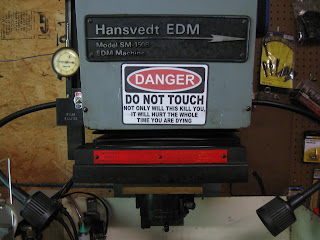 I actually burned something this week. It is a pretty neat machine once you overcome your fear of massive electrical arcs in a solution of flammable oil. It has a clear door in the front and under power it sizzles like bacon frying. There are a great deal of charts telling you how to alter the settings. You have a gap setting, because the 2 pieces of metal never touch each other. There is also a power adjustment to determine how fast you want to cut, and a frequency adjustment to decide how many pulses per second you want to burn. This is going to be another trial and error process for sure.

And here is a burn I made this week. 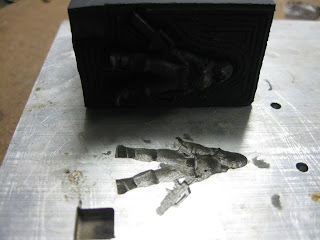 The dark block at the top is a block of pencil style graphite, just a little higher density. The cavity suffers from me getting bored with slow progress and cranking it up to see just how fast it can go. Overall it seems a neat little piece of gear.  This is the old method of doing these things.

Here is a pic of a very old mold made in the 60's by Aurora. Things like this have been a huge help in the goal of trying to re-learn many things that were lost over the years.  ( maybe a new word here- Archeo-industry?)  One new advantage we have over the 60's is the use of 3D printers to test things out. Here are some bits printed out this week to test for size. 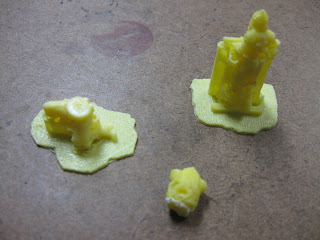 The waist on the girls is too small in relation to the hips so I am going to re-size.  I already increased the guys legs by 120% to keep up with scale creep.

Here is the new Arburg controls. I installed audible and visual warning lights and all new matching temperature controls, fuses and relays. It works like a dream! It previously was running on a single functional control with the nozzle wired directly to 110 volt electric and the second heating unit having to be switched on and off manually resulting in erratic temperatures. 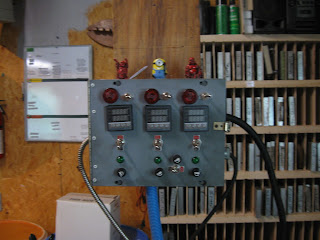 If you open the door wires will explode out like a bundle of spring loaded snakes. Note the advanced inventory system on the left and new mold storage on the right. I built that out of 2X10 lumber because those molds are heavy enough to sag lesser boards.

And speaking of springing out like a bundle of snakes...... 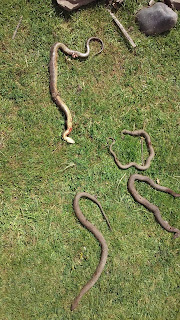 I suspected there was a snake under a rock just outside the workshop and was surprised- (horrified) to find a hideous pile of snakes instead. Luckily I found out a garden hoe is actually +2 vs serpents and you automatically gain initiative if the serpents are caught unawares. Looks like the pond is safe for another year!

I actually have ducks again and so far have managed to keep them from getting eaten. 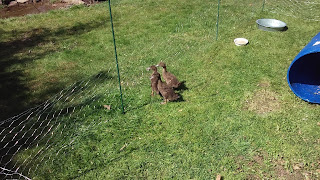 Although one day this behemoth was spotted walking in the creek and I think their luck may run out. This snapping turtle was so big I just let him go on his merry way. Maybe 15-20 pounds? You could actually hear him crashing through the grass as he approached. 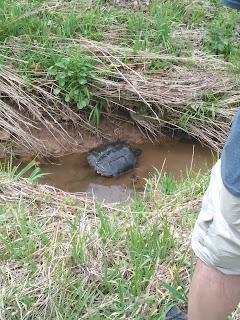 Now for some other odds and ends. The tyrannical local government will not allow me to add any more room to the workshop so we still have no place to house the laser cutting machine. The previous rule was things had to be 5' off the property line. That was increased to 10' and now 15'. In addition all structures require footers and a building plan approved. This old style pole barn would not be allowed to be built today.

The other problem is the local overlords- (school board) will tax the living shit out of anyone and anything they can. If you so much as put a railing on your porch they can re-assess you and make you pay for that railing everyday for the rest of your life or until you finally break and can not afford it. Then they forcibly toss you in the street to die and confiscate your house.  ( but hey, its for the kids!) I see so many really great empty buildings for sale that I could buy and have a great place to expand. But the iron boot of the teacher's union is ready to stomp on every throat. If I expand I have to leave this area and move to a more business friendly locale.  Not going to happen. Too old and lazy. Plus this equipment is too hard to move.

The idea of a Makerspace for gaming is also facing one gigantic hurdle. Litigation. If anyone stops by to use any of the equipment and gets maimed it pretty much is the end of my life as it exists today.  So the reality is that for as far as I can see in the future progress will be limited to the glacial pace of a single fat old geezer. Me.

Sorry for that pessimistic bit, my intent is for this this blog to give people ideas and inspiration. I also try to keep it as real as possible.  It is my firmly held conviction that the world's economy is going through a lot of changes and will continue to do so. We are living in a lie based economy, where everything is as honest as an ex-cons resume. Fakebook and the internet seem to exist so people can avoid reality and pretend to be something else. People are bombarded all day long with the false images other people are presenting.

Someday a house of cards will tumble. The rise of robots is also going to make for a lot of extra humans roaming the planet with no real purpose.

There is a certain joy in making something with your imagination and your hands. People just need to find the right combination of tools and help and everyone can benefit. Life can be a win-win situation. Contact with collaborators is ongoing, some works out some does not. I am in contact with some amazing artists and hopefully you will someday get to have a look at some of their work.

So with that cliché soaked pep talk, let's get out there and go team!!
Posted by Ken Krout at 9:26 AM